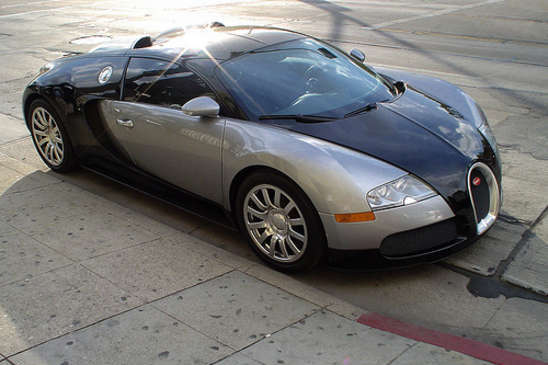 Drive As Fast As Hell to Chi-Town

Photo: A Bugatti Veyron; Now THAT's how to deal with inadequacy

(SNN) Do you own a Bugatti Veyron? Probably not.

If you did you’d be driving it now, in bed with your passenger, or robbing banks to pay for it. It costs $3,000,000 a copy and will still be accelerating as the speedo flashes past 200 MPH.  My car couldn’t hit even half that if it was dropped from a plane.

The Veyron has a 1000 horsepower engine and looks like sex on wheels.  It has two seats, a nuclear ashtray and a condom dispenser.  The price includes weekly oil changes for the car and daily testosterone top-offs for the driver.

Options include a Lamborghini lifeboat and a Ferrari fuel truck trying to keep up. Optional extras include self-cleaning seat-bottoms and a divorce lawyer on call.

There are negatives, however: It can’t get from here to the corner without stopping for gas. It’s too small to race in NASCAR—not enough room for sponsor decals.  And unless your name begins with :Your Excellency,”  “Sheik,” or “Mitt,” you can’t afford one.

Looks like I’ll be keeping my Nash Rambler after all.

Why bring up this monstrously fast and expensive car? Would I be so cruel as to try to make you feel jealous, impoverished and miserable just for my own amusement?

Yeah, sure, but that’s not the main reason I sing the Bugatti’s praises. See, everything except the price tag, upkeep, gas mileage, impracticality, and unnecessary horsepower is a technological marvel.  Take the thinking behind the nuclear ashtray. If you smoke, instead of awaiting a nightmarish death from Lung Cancer years from now, why not beat the rush and opt for a quick expiration from radiation poisoning?

Call it the genuine pseudo-journalist in me, but I’ve also tied in my Bugatti Jones with a real news story. Okay, maybe not a big news story, but in this era of never-ending Kardashian reportage and Ebola Hype, I say screw the Pulitzer, I’m here to entertain.

I’ve discovered why America needs Bugatti Veyrons.  And by “Bugatti Veyrons,” I mean anything on four wheels that can exceed a speed limit. And by “America,” I mean the city of Chicago.

Here’s Chicago’s problem. It has a need for speed. Specifically, Chicago desperately requires drivers to put the pedal to the metal and get ticketed for it.

This is because the Windy City is going broke.  It started when some hometown politicos outsmarted themselves. (Yeah, I know, politicians outsmarting themselves—shocker!)

Chicago thought the best way to bring in new money was to make criminals pay for their crimes. Not big time criminals, mind you—modern day Al Capones need not apply. Instead of rebooting The Untouchables, Chicago decided to pick on their own motorists instead.  Chicago made itself a giant speed and red light trap instead and expected speeding tickets to provide that new money.

Since there was too much other crime to divert its police for such a mundane task, the city installed 4.3 gamillion automated speed trap cameras to do the job. A speeding ticket costs about $100 per camera click, so politicians sat back and waited for the money to roll in.

It didn’t.  They expected $90 million a year.  In the words of Maxwell Smart, “they missed it by that much” and ended up a mere $50 million short.

Chicago drivers killed the scheme in a totally unexpected way.  They obeyed the speed limit and stopped blowing through red lights.

So if you live or visit Chicago soon, give the city a hand and drive there and around town in your Bugatti Veyron or Bugatti Equivalent.

You wouldn’t want to disappoint politicians, would you?

Unaltered Photo: Some Rights Reserved by Axion23 flickr photostream, The Sage nor this article endorsed. The original image can be found here