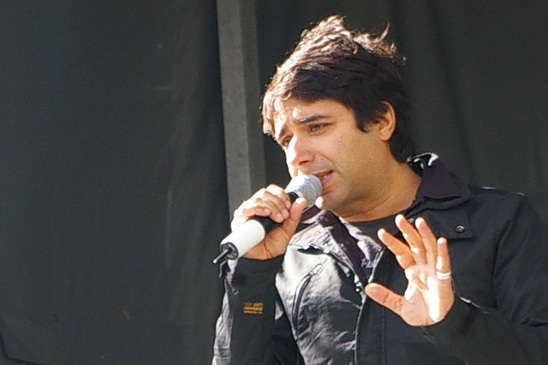 Jian Ghomeshi: All My Fans Make Me Sick

(SNN) - With dangerous cracks threatening to appear in a Canadian cultural icon, CBC top brass may someday be singing, ‘All Our Fans Make Us Sick,’ their rendition of Jian Ghomeshi’s song, ‘All My Fans Make Me Sick,’ from the days with his band, "Moxy Früvous".

A video of ‘All My Fans Make Me Sick,’ circa 1996, has been unearthed and posted on YouTube by a Victoria blogger. Afterwards, Ghomeshi says in the video, “It sounds like a bit of a joke song, but it’s something I really mean.” With his beaming smile, shining eyes, his great charisma throughout, ‘All My Fans Make Me Sick’ does seem to be all about fun. Even when forewarned, it is hard to believe that it wouldn’t be.

But, just as woman are claiming of what should have been an enjoyable intimate encounter with Ghomeshi, Jian clarifies that ‘All My Fans Make Me Sick’ is not about fun. Watch the video and you’ll see Ghomeshi declaring that when he slams his lowly fans, he feels the same as when he accidentally squashes a bug – he just doesn’t care.

I think we’re getting that now, Jian. And it is all so chilling, so very sickening.

Image: Some Rights Reserved by Tom Cochrane (source flickr), The Sage nor this arti le endorsed. The original image can be found here.