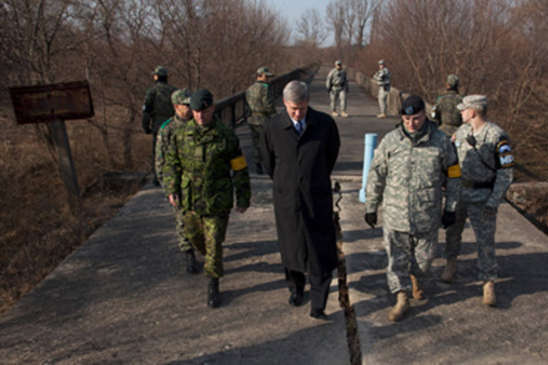 (SNN) - The following incident was caught on 30 camera phones: “Look,” he shouted at the mob of reporters who followed him into the men’s room, “all I know about this controversy is what I read on the Sage News Network’s website.”

“North Korea is threatening to steal the credit card info of every Canadian,” a female reporter screamed at him, “all because you haven’t turned the writer of the article over to the North Korean government. And if that happens, it’ll ruin the Christmas shopping season and tank the economy. How can you not be on top of it?”

A reporter shouted, “No wonder your approval rating has dropped to seven percent in the last two days.”

“For the last time,” PM Harper yelled like they were all out of their minds, as everyone in the room muttered their agreement, “we have not had a national security threat, or have agents that are at risk of being executed, which necessitates that we threaten the SNN writer who wrote the article with imprisonment if he doesn’t turn over the person who leaked the classified documents over to us.” He took a breath and yelped, “I have it, from a reliable source, that the SNN plays fast and loose with the truth. And you can quote me on that.” Then he yelled at the top of his lungs, “Now, will everyone get the hell out of here so I can take a pee?”

Another reporter shouted, “How can the head of the government not know what everyone else knows?”

“How come every time the government wants to deny what’s really going on,” yet another reporter chimed in with, “they alway say the media made it up, to increase ratings?”

Yet another called out, “And I suppose the next thing you’re also going to deny is the SNN story that The Sexual Inadequacy of My Husband in the Bedroom is your wife’s favorite book of all times, too.”

Image: Some Rights Reserved by Stephen Harper flickr photostream, The Sage nor this article endorsed. The original image can be found here.