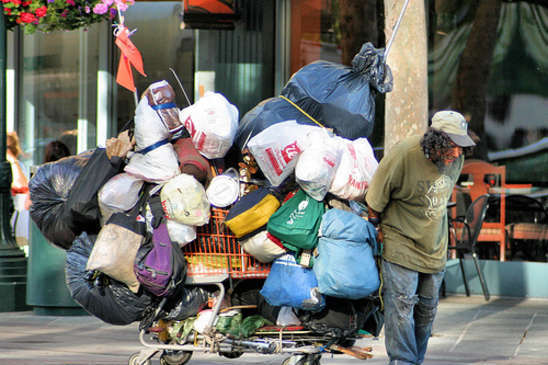 All I Want for Christmas is No More Stuff

Photo: Even homeless people end up with too much stuff

I don’t want any Stuff for Christmas.

So, please don’t send me any Stuff for Christmas. Or Chanukah or Kwanza or Festivus, or just because you like the cut of my jib.

I am not anti-Capitalist.  I’m not saying, “don’t spend money.” I respect people who make and sell Stuff. But I want my loved ones to use my Stuff money for a better purpose.

I’m not being a martyr here—I have accumulated more Stuff than I’ll ever need. I have an overflow of Stuff. Some of my Stuff is sentimental treasure. But I haven’t seen the sentimental treasure since the cows came home because it’s buried underneath the other Stuff.  (Please don’t give me any cows, either.)

My Stuff isn’t spread all over the house and I’m not a hoarder like the ones you see on TV. To borrow from the late George Carlin’s brilliant comedy routine, I have ”a place for my Stuff.”

Most people put Stuff in the basement/cellar where it grows mildew and must be tossed.  I live in Southern California. Southern Californians don’t do mildew. It was traded long ago for several Kardashians and a future draft pick.

Without mildew to cull the herd, Southern Californian Stuff never gets tossed. When Stuff overflows, you are forced to get a house with a bigger garage.

My wife and I will continue to buy Stuff for loved ones, of course—the Grandkids particularly. Just none for me, thanks.

This brings us to Reason (3), the favor I owe to the guy who got my dog back to me. He’s been dead for a long time but he’s still a saint. Make that a Saint—name’s Jude.

When I was a kid I was told St. Jude’s specialty was “Lost Causes.”  When I was twelve, the dog I loved was lost for days. I prayed for his help and just like that, St. Jude did his magic thing and my dog came home.

Now “St. Jude” is better known as the name of a great hospital. Whether you or I believe in St Jude the Saint is irrelevant here, because we’re talking about “St. Jude Children’s Research Hospital .” There they treat, ease the pain of, and nurture children suffering from the ravages of Cancer and other life-threatening diseases. Families are never billed for anything. To do that, St. Jude’s needs money. Lots and lots of money.  They need money a lot more than I need Stuff.

Anyone can contribute, of course, with or without giving up your Stuff.  May I suggest you go to:www.st.jude.org  to find out how, or just send a check to “St. Jude Children’s Research Hospital, PO Box 50 Memphis, TN 38101-9929”

Unaltered Photo: Some Rights Reserved by Richard Masoner flickr photostream, The Sage nor this article endorsed. The original image can be found here