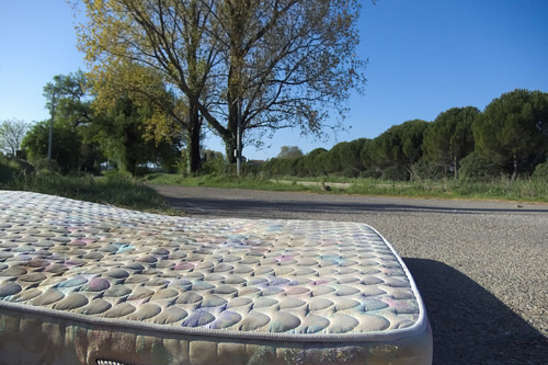 Photo: It's all about the "Road Tail"

(SNN) A hitherto unreliable but close-enough-for-satire source has confirmed that the Democratic Party will not run a candidate in the 2016 U.S. Presidential election. This is an unprecedented development, if you don‘t count George McGovern in 1972, and frankly who does?

My source at the Democratic National Committee—lets call him “Deep Skypiece” because the cool nicknames have been taken—said the decision does not mean the Democrats are giving up the Presidency for good, “but frankly it just makes the most sense now.”

With Hillary Clinton’s polling numbers showing she would probably beat any GOP candidate, I asked why pull out when a win was still possible?

Deep—we’re on a first name basis—replied with more shocking news: Mrs. Clinton had already decided not to run for President. Instead she wants to focus on being a Grandmother and keeping her husband on a short leash.

Former President Bill Clinton stood ready to hit the campaign trail for Hillary, Deep told me, but the former Secretary of State declined the ex-President’s offer to take to the hustings. Her reason, according to Deep:

“Duh. He’s still a hound. Why should she send him out into a wonderland of road tail?”

Does this mean the Democrats are just giving up in 2016? My source says no, this is actually a daring strategy to regain power. The Dems will now focus all their efforts and campaign cash on local elections. This way, the Democrats have a good chance of winning back the Senate and making inroads in the House.

“If we do that, we can thwart any legislation the new GOP President tries to pass—you know, like the GOP has been doing to us for the last six years. We figure that’s the best way to spend our campaign money. It’s not like we have GOP-type money available to throw around.”

The amount of “GOP Money” came to light this week when it was revealed GOP cash cows, the Koch Brothers, will spend almost a Billion dollars to buy the Presidency for their favorite GOP candidate.

“We can’t raise that kind of cash, especially with Hillary out of the race,” Deep Skypiece admitted. “How much do you think we’d raise for Joe Biden?  Couple hundred bucks, tops, and that's just if he promises to buy a rail ticket out of town.”

Surely the Democrats have other viable candidates, I suggested.

“Yeah, right,” said Deep with a touch of Sarcasm. “It’s so bad, you know who’s making a comeback? John Edwards. The story’s in the National Enquirer so it has to be true.

“Our polls show the next most popular Democratic Presidential candidates are George Clooney, Sen. Elizabeth Warren, and that guy who crashed the drone on the white house lawn.”

This reporter’s call to the GOP National Committee for comment was directed to their “Blame Obama Desk,” which said they would have “no comment” until they can gather enough information to blame Obama.

“Stay tuned,” said Deep Skypiece, “The fun is just beginning. The Dems are going from Lame Duck to No Duck and the GOP is stuck with 15 male Dumb Clucks and Sarah Pallin.”

Unaltered Photo: Some Rights Reserved  by J.S.B. flickr photostream, The Sage nor this article endorsed. The original image can  be located here.