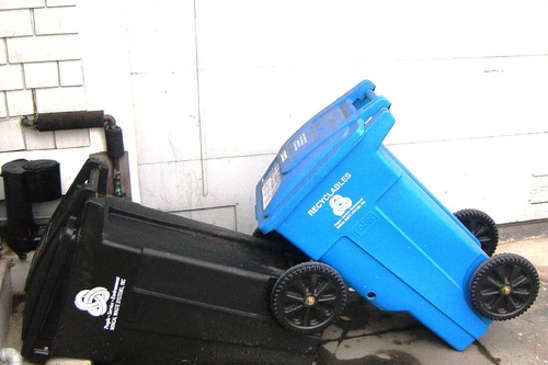 Eau de Garbage at Wind in the Laurels

(SNN) The police were called to the upscale Wind in the Laurels neighborhood last Sunday night. According to Officer Duright, the altercation was over garbage. Officer Duright remarked, “We expected the new garbage rules in Seattle to cause some issues, but not in this neighborhood. “

Seattle outlawed food scraps in the garbage and allows collectors to report violators. All food waste must go in the yard waste bin or a fine will be issued. Officer Duright reminds everyone the collectors will not be digging through your garbage, as the neighborhood crows are very diligent at that duty.

Officer Duright explained the scuffle began when Mr. Detritus accused his next door neighbor, Mr. VR Green, of tossing a pizza box in his garbage can. Mr. Green insists he only eats sustainable gluten free pizza from Really Good for the Environment Pizza and the box in question was from Domino’s. Mr. Green remarked he didn’t need to stuff a pizza box into Mr. Detritus’ garbage because improperly disposed of egg shells were already sitting on top. Mr. Detritus then accused Mr. Green of spying on him while he took out the garbage.

Mrs. Green called the police when Mr. Detritus shouted “recycling jerk” at Mr. Green and sicced Muffins, his peekapoo, on Mr. Green. No damage was done to Mr. Green. However, Mr. Detritus’ garbage can was knocked over and Muffins properly disposed of the eggshells.

Unaltered Photo: Some Rights Reserved  by Darwin Bell Flickr photostream, The Sage nor this article endorsed.

The original image can  be located here.