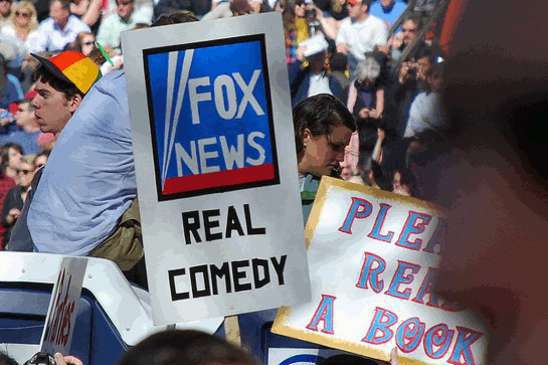 The Profit Motive and the Media

... another Snippet from Fox News

(SNN) - “. . . An informed electorate is vital to democracy, and like with everything else, the profit motive is best at delivering that to the people,” a female anchorperson said.

“I couldn’t agree more,” a male anchor said. “Take this very network. We’re the only ones reporting that ISIS is a much greater threat to our country than the World War II threats from Nazi Germany, Japan, and Soviet Russia combined. But is the liberal media getting that truth out to the people? I think not. If they were, they’d be as profitable as we are.”

“Right,” the woman added. “Someone’s got to raise the alarm that Ebola is a greater threat than heart disease, cancer, and diabetes combined, so that the people will demand that no one from Africa and Mexico be allowed into this country. And you can’t get anyone to tell the great truths of the day, like that, just for the heck of it. The only people who have an incentive to get to the heart of an issue, are people like us, who make millions from books and paid public appearances.”

“And look at the damage the not-very-profitable news organizations are doing to this country. Tens of thousands of good ol’ red-blooded American mothers are refusing to let their kids play football in grade school, because of all the hysteria the liberal media has created about brain damage.” He threw up his hands. “And how the heck are we supposed to win the next couple of wars if our kids grow up to be wimps?” He shrugged his shoulders. “I mean, getting over thirty concussions from playing football, all the years of my youth, didn’t do a damn thing to my mental abilities . . .”