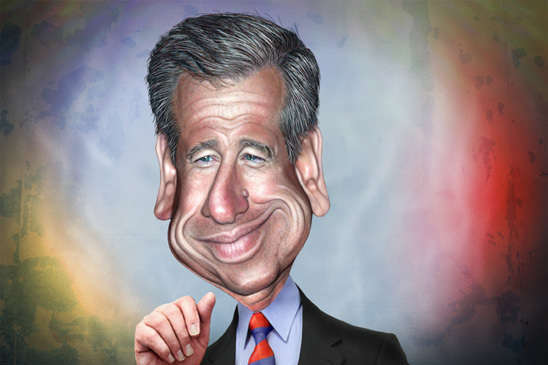 Newly released video footage from a Las Vegas Strip casino suggests the man actually reporting during 2003 from the front lines of the desert war was not only an NBC plant, but actually Brian Williams’s estranged identical twin brother, Biff Williams. Heavily guarded by Gambino crime family button men, Biff reveals, via grainy video, how Brian Williams approached him in the early winter of 2002 with a discrete business proposal.

“I was as surprised as a fella could be,” Biff Williams said. “Here I am, working dollar bills into garters in my favorite all nude night club, and some goon taps me on the shoulder and says my brother’s outside and wants to talk to me. Me, I’m thinking this is a case of mistaken identity, or I’m about to get whacked.”

With all of the grace of a mob snitch, Biff Williams retells a seemingly impossible story, but with sporadic flairs of polished grace and articulate recollections. Through journalistic immersion training, most reminiscent to “My Fair Lady”, Biff details his journey from Vegas lounge fly to one of the most recognized news men in the world.

“It wasn’t easy, hear you me,” Biff recalls. “They busted my hump 18 hours a day for 2 ½ months. I damn near thought I’d lost my mind, jumping through their hoops and running their hamster wheels. But I said to me, keep your eye on the prize there Biffy boy. You do that and it’ll all work out.”

And what exactly was in it for Biff Williams?

As the video somewhat darkens and Biff’s voice lowers to an almost hush, he reveals his hidden secret.

“B (Brian Williams) says to me, he says,” Biff begins. “He says I know you’re in deep to some New York wiseguys and I hear around the campfire there’s some legal trouble making it hard for you to bust out a living, no matter where you pitch your tent. I’ll make you square with the boys back east and these legal matters – well let’s just say I got connections.”

“So me, I’m thinking, it’s about time my big brother finally throws me a bone,” Biff says as the video continues. “So I say, sure, I’m in. He asks, don’t you wanna know what for? I say, nah. You pull your strings and I’ll be your dancing puppet. Man, oh, man I didn’t know how true those words would ring.”

With training complete, Biff assumed his brother’s identity in a role only select, and still largely unknown, people helped orchestrate. Biff continued in this capacity for nearly 8 months, until he allegedly encountered military police in what was best described as an underground network of lonely, Iraqi provincial wives and confused, young servicemen. No reports of the alleged scandal surfaced and Biff says none will appear anytime soon, especially with his brother facing certain disciplinary action.

When reached for comment on the fraternal allegations, neither Brian Williams, nor an NBC representative would retort on the situation, only saying that the Brian Williams’s investigation is pending a final outcome, and will remain internal for the foreseeable future.

Image: "Caricature of Brian Williams"  Some Rights Reserved by DonkeyHotey flickr photostream, The Sage nor this artivl endorsed. The original image can be found here.