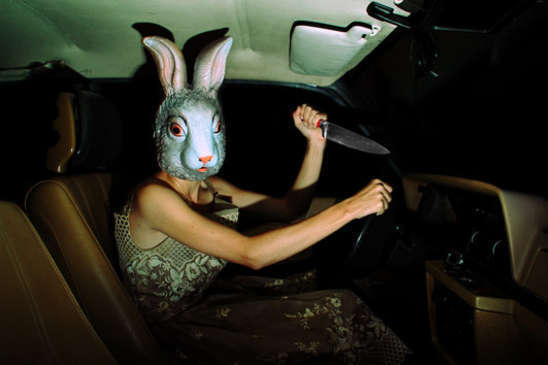 (SNN) - Regardless of the fact that guys tend to regard the automobile as an extension of male ego, and gals regard the car as a sort of giant handbag with wheels… I think we can all get together to agree on the following.

PEOPLE WE WANT OFF THE ROAD:

Let’s get this perfectly straight: EVERYBODY knows the posted speed limit is not the REAL maximum. We may not know what the real maximum is, but we sure know it’s not 100 km per hour, because if it was, then we’d all – the whole country – be in jail by now. With complete meal and maid service provided by the crown. Which is not a bad idea. (Would they put my kids in a different cell?)

So we’ve determined that the Maximum speed limit is not the real max, but merely a number picked at random by some harried civil servant at 4 pm on the eve of a long weekend.

Civil Secretary: “So what shall it be, Harold?”

Civil Servant (not to be confused with ‘servant’ as in ‘to serve’): “Gawd, I’m late for the cottage. My wife will kill me. Let’s make it…” (looking at the bills in his wallet) “oh…a hundred.”

So the posted speed limit has been 100 km per hour for simply ages, and everyone has forgotten why. Including Harold, who is now driving a Bentley in the Cayman Islands.

Which brings me to the point: what are we going to do with all these drivers who think they should only drive the posted maximum? You know…the ones who amble onto the highway and then proceed to travel at exactly 100 km per hour, like their cruise control got stuck there and couldn’t get out? These people are a menace to all us conscientious commuters who actually intend to get to work the same business day we started out.

No punishment is too great, I say. Move ‘em all to Quebec.

People who regard the Maximum as the Minimum:

Okay, guys (and you know who you are.) Will you PLEASE agree on which speed we should all be traveling at? Post a speed over each lane. We don’t care. As long as you all AGREE.

It’s a fact: no two men can decide on how fast the traffic should go. If one guy decides the left lane should go 130 km per hour, then the guy in the red mustang behind him is determined to drive 131. And the race is on to see which guy can jockey his car through several lanes of law-abiding soon-to-be-Quebecers, endangering all live bodies not to mention their poor unsuspecting cars. Meanwhile, the male driver in front is only going 129, so everyone comes to a screeching halt, which gives all guys in the vicinity a chance to play with their horns and practice finger exercises.

I say, MAKE UP YOUR MINDS! Guys of the world, get together and decide what speed the fast lane should travel at. Then – just for you – us ladies will get together and construct a series of fast lanes all the way to the moon…one way, of course.

Melodie Campbell writes funny novels for which she has won awards. You can find them at Chapters, Barnes&Noble, Amazon, Walmart and even Zehrs.

Image: Some Rights Reserved by noisemedia flickr photostream, The Sage nor this article endorsed. The original image can be found here.