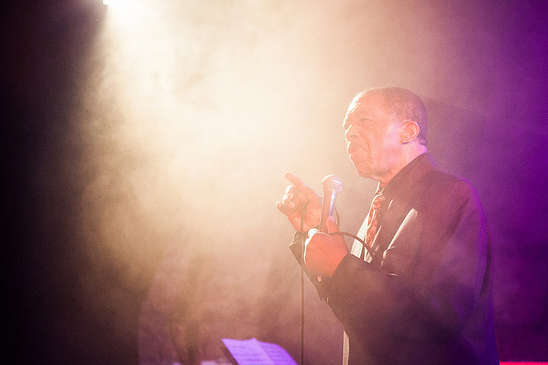 The Night Has Come for Ben E. King

He had a midnight voice. You would hear the swirling strings, the comforting thump of a standup base, the piano riff so simple yet so complex, and then that voice would take you through a journey of the pain of love, but reassure you that your strength would see you through.

The voice reminded us that he, too, had been through loss before and lived to tell.  The words and music were written mostly by the legendary songwriting team of Lieber & Stoller. The words spoke of hopes and desires and the lonely winds lovers would count on to bring their baby back to them.

King told of the hours late at night when he would sit and count the tears. There was the mystery of his Rose in Spanish Harlem. The sadness of the time his baby was moving' on down the line and all he could do was lament. He taught us love was a magic moment that could take us by surprise. He sung of the joy we would feel when we saw that look in her eyes. It was a moment sweeter than wine.

Ben E. King, in addition to another great singer, Clyde McPhatter wa, at different times in their history, the voice of The Drifters--an enduring and magical R&B vocal group that sang to the pre-Boomer and Boomer generation. If the group sounded different at different times, it was more than the shift of a lead singer. At one point managers fired the entire group, replaced them with another collection of singers.

The first hit by these "new" Drifters, "There Goes My Baby," brought lush strings, played against King's rough-edged voice, to the forefront. Later King would have his biggest hit, "Stand By Me," as a solo artist. That tune had a second trip up the charts when it was used in the hit movie of the same name.

Ben E. King had an unforgettable and amazing sound that was both open-wound raw and gently caressing. It was the kind of voice perfectly suited to tell tales of love's heartbreak and joy, a voice we will never forget and will miss forever, forever till the end of time.

Photo: Some Rights Reserved  by TheArches Flickr photostream.  The Sage nor this article endorsed. The original image can  be located here .