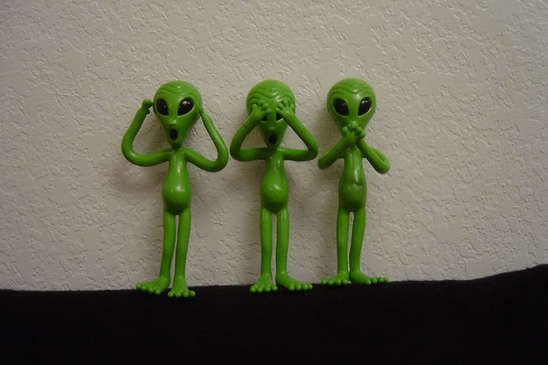 (SNN) There is a tremendous backlog of working conspiracies in the world today. And I'm not even counting why water is fluoridated, why Adam Sandler is still making movies, or who secretly controls that thing on Donald Trump’s head.

To ease the burden, I have debunkified the six biggest conspiracies facing us today. This enables new, even more ominous Conspiracies to move from under your bed to out in the spotlight.  Sleep tight.

THE MOON LANDINGS: NASA claims they were real. They were not. The space agency conspired to fake these landings to fulfill President Kennedy’s pledge to beat the Russians to the Moon and impress Jody Foster.  Co-conspirators included then President Richard Nixon, film director Stanley Kubrick, Buck Rogers, Hasselblad (the camera), Hasselhoff (the “Hoff”), Erector Sets, Lincoln Logs, Hall of Fame shortstop Chico Carresquel and whoever made that fake wavy flag thingie.

The allegedly heroic “astronauts” were actually actors hired from Central Casting —except Buzz Aldrin, a Houston tourist kidnapped while buying gum. The fakery occurred on a sound stage at Universal Studios in Hollywood. Ask a tour guide nicely and he may show you the original fake moon rocks made out of Tofu and Silly Putty.

KENNEDY ASSASSINATION: Lyndon Johnson, the Mob, the CIA, Fidel Castro and Lee Harvey Oswald—none of them shot John F. Kennedy.  And no, Mick Jagger, you unsympathetic devil, it wasn’t you and me either. I cannot reveal who actually pulled the trigger because those behind the conspiracy are still out there and they don’t like snitches. I will offer one small hint: It was Laika, the first earth-orbiting dog, the very same pooch the Russians allege died in space.  If you still believe Russians, you’re just naïve.

GLOBAL WARMING:  U.S. American Senator Darrel Imhofe (R-Oilhoma) recently stood in the hallowed halls of the august body I like to call Congress and held a snowball in his hand. This snowball proves Global Warming is a fraud perpetrated by know-it-all scientists and Liberals demanding everyone drive kite-powered lawn chairs. What sane politician* would tie up one hand with a snowball when it could be accepting campaign funds with the other one? Ergo, there is no Global Warming, right? Except Senator Imhofe (pronounced “Doof-us”) failed to explain why he's claimed as a "Dependent" by Exxon, why Houston is now listed as a lake, or why a rogue tornado recently stole his hairpiece.

UNIDENTIFIED FLYING OBJECTS (UFOs): UFO believers constantly try to convince gullible citizens that the objects are extraterrestrial in nature. Do I look stupid enough to believe these lights in the sky come from a star system 50 million light years away?**  In truth, UFOs are from the Pleiades star system, a mere 425 light years away.

CHEMTRAILS: Conspiracy theorists say The CIA, the Military, and the Tooth Fairy have gotten together and chosen to drop crap on America from the sky.  They are never quite sure what the stuff is supposed to be, but are pretty certain it’s bad for us.  Here’s how they claim it’s distributed: Secret tanks and spray nozzles have been snuck aboard commercial airliners. The airliners then scatter the secret sauce, cleverly disguised to look like airliner contrails on scheduled flights.

Here’s why this is a crock. Airlines charge for anything extra brought on to an airliner. The Chemtrail folk can’t legally deduct their stuff as an expense, nor can the airlines report their ill-gotten Chemtrail fees as profit. So the IRS would have busted them both for tax fraud by now.

TWIN TOWERS: And lastly but not leastly, did terrorists in stolen airliners actually bring down the Twin Towers on 9/11, or was it a Government conspiracy? As you know, this event lead to war. First the U.S. accidentally attacked Iraq due to a mapping error by President George W. Bush, who’d meant to invade Peru.

When Bush called a press conference to announce:  “Yellowcake is a tasty after dinner snack," Vice President Dick Cheney took over. And beneath Cheney’s chest beats a Pleiadian artificial heart powered by Greenhouse gasses, Chemtrail residue and Laika poop.

* “sane politician” is an Oxymoron. We get that, but just play along, okay?

**According to Wikipedia, there is some debate on whether or not I do, indeed, look “that stupid.” If so, it’s due to bad lighting and a grill inherited from my mobbed up uncle, Joey “Buttface” Corcoran.

Photo: Some Rights Reserved by Stefan Andrej Shambora Flickr photostream. The Sage nor this article endorsed. The original image can also be found here.