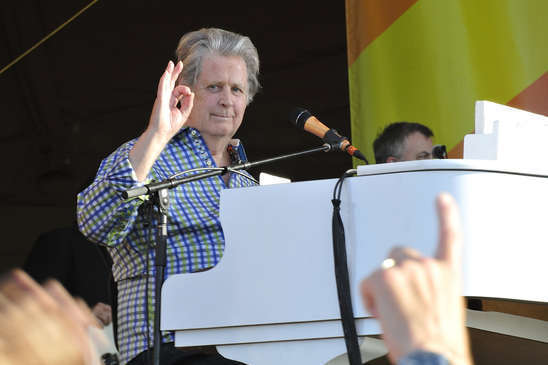 Photo: Brian Wilson is going to be okay

(SNN) The outdoor 4th of July Concert was in full swing in the Nation‘s Capital. Some 500,000 witnesses were on hand to hear some good old-fashioned rock and roll on the Mall. It was 1980.

My cameraman and I had just been escorted up on the main stage not five feet away from one of the five certified American pop musical geniuses of the 20th century.  But with the crowd in full throat, I could not tell if the Genius was helping entertain his fans or merely himself, or was even aware of the band wailing away onstage beside him.

The Genius stared at the keyboard of his white baby grand piano, barely moving, expressionless. He made no attempt to connect with anyone. Not the band, not the crowd, not the media allowed a few minutes onstage to document the event for local news.

Soon it was time for us to leave. The band started up a marvelously ironic version of Merle Haggard’s “Okie from Muskogee,” as the piano player continued with no change of expression.

Brian has been a co-founder, performer, player, primary songwriter and producer for the iconic rock and roll band “The Beach Boys” since its inception in the early sixties. Along the way he has tangled with personal demons that would fell an ox, and indeed at one point his mental issues kept Wilson confined to his room for more than three years.

The new movie, “Love & Mercy,” directed by Bill Pohlad, from a script by Eric Moverman and Michael J. Lerner, is about—among other events in the fifty year career of the band—the critical moments in Brian’s journey to his new sanity and a return to creative accomplishment.

As a film critic, I hate being asked what I think of a movie just as I exit the theater. One of the key quality tests for me is whether a movie lingers in my memory or  fades away with the film’s last fade out. The best ones keep barging back into my consciousness, nibbling away at my reservations, asking pertinent questions the film gave rise to, and replaying key moments in my head.

Love & Mercy has proven to be a nuisance in that regard. Now I can safely say that for me it can take its place among the best musical bio-flicks I’ve ever seen, and hovers near the top of my list of favorite movies released this year.

You start with the subject matter. Brian Wilson and the Beach Boys may at first seem a topic as bland as one of their early surfing songs, but below the surface roils an emotional complexity and human drama more fitting for the orchestral and vocal masterpieces Wilson created later in his career. Emotions wash over you like the layered voices in “God Only Knows.” You are drawn into tones, rhythms and shifting tides of Brian’s life as unpredictable and compelling as the shifting rhythms in  “Good Vibrations.” Credit the directing, writing and editing for that aspect, as Love & Mercy skips merrily back and forth in time with the ease of Marty McFly.

Credit too for decisions made before shooting began. One was to cast two brilliant actors to play Wilson young and old, two men who don’t much look like him or each other. Paul Dano as young Brian and John Cusack portraying him twenty years later give performances sure to be noticed during award season.  (If they could be nominated as a team, like a horse-racing “entry,” they would be shoo-ins.)

In chosing two actors who get the reality of a living character in lieu of mere physicality, they are a little like a great tribute band.  Scores of forgettable Beatle tribute bands, for instance, emulate the look and dress of the original foursome. But none come closer to the Beatle sound than Will Lee’s “Fab Faux,” which makes no attempt to imitate the Beatle look, just focus on getting the music right.

Supporting performances in Love & Mercy  are no less impressive, headed by the great Paul Giamatti as Wilson’s terrifying guru, Dr Eugene Landy, and Elizabeth Banks as his love interest and one of his saviors (and eventual wife).

The movie also succeeds because the songs are flawlessly lip-synched to the original recordings, but even more so because you get to watch the creative process firsthand.  As a fan of songwriting methodology, I was utterly enthralled seeing Dano as Wilson working with studio musicians—including actors portraying the legendary LA “Wrecking Crew”—in action as they create “Good Vibrations” in the studio.

This process illustrates Brian’s seemingly irrational perfectionism as he obsesses over the attack used by the cellos in the number. He apparently spent hours with them on one short passage while the rest of the musicians and band cooled their heels.  A brilliant editing cut underscores Brian’s triumph as the studio cellos nail the sound he wants and propels the song into it’s final fadeout.  (about 3:35 in the actual record)

The primary conflict in the film is the struggle to pry Wilson loose from the clutches of his psychologist, Landy, who literally ran every aspect of his life while claiming to be after a cure for Wilson’s mental issues.  More conflict is provided by primary Beach Boy lead singer, Mike Love, unhappy when Brian shifts creative focus away from the commercial popularity of the Beach Boys early, surfing sounds.

For a picture that demands to be seen, the title does it no favors by giving little clue of its high drama, great acting, enchanting music, or great filmmaking onscreen.  Working the words “Beach Boys” into the title couldn’t have hurt, one suspects. Love & Mercy was chosen, no doubt, because it is the title of a Beach Boy song—spoiler alert— which provides a powerful punch when Brian Wilson himself performs it over the closing credits.

Unaltered Photo: Some Rights Reserved by Takahiro Kyono Flickr photostream, The Sage nor this article endorsed. The original image can also be found here.