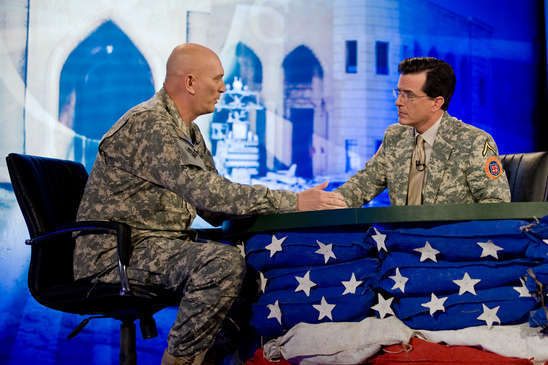 (SNN) I usually DVR the late night guys and then watch their monologues and first desk piece the next morning.
Depending on guests, I may catch an interview or two. So picking a new favorite late night TV host is based on anecdotal evidence.

But all things being equal, to my mind one host is starting to pull away in this post-Apocalyptic Lettermen-less universe.  Unlike most Media and the green eyeshade boys in accounting, I don’t judge these shows’ success by merely toting up ratings. Dave's appeal was always more limited than that of commercial pop icons like Carson and Leno, so I also don't expect my fav to bust out commercially. But I love that like Dave he will lay the wood to stupid concepts and inept statements wherever he sees it, smiling all the way.

There will soon be an even greater void in funny, smart, spot-on, polished, longer pieces when Jon Stewart leaves The Daily Show in August. This has been a terrible year in comedy host-loss for progressives—and at a time when there has rarely been such a target-rich environment. (A dozen GOP candidates and counting--be still my heart!)

It is doubtful anyone can replace Letterman’s biting wit and take-no-prisoners attitude with dumb or devious guests.  I dearly remember moments like when he got John McCain to admit, “I screwed up.” I virtually stood up and cheered when Dave casually said to Bill O’Reilly, “About 60 percent of what you say is crap.” (Would have literally cheered but Dave’s estimation is about 39% low.) Madonna thought she was clever when she insulted Dave’s hair. “What have you got there, a swim cap? Dave responded, convulsing the house and teaching a lesson to an amateur smartass messing with a professional one.

Steven Colbert, late of he Colbert Report, hasn’t left TV for good, of course, he returns as Dave’s timeslot replacement in the fall. Gone however, is the big blowhard knucklehead caricature he played on the Report, replaced with someone undoubtedly more affable.

Stewart is the most irreplaceable in at least one aspect.  Unlike the others,with whom he shares the gift of funny, Stewart is also a journalist.  Not a traditional journalist to be sure, but his humor is fact-based, heavily researched and vetted.  He did not invent the technique that serves him well, but he at least popularized a method that hits comedy gold and informs his audience to boot.

Jon starts by letting his subject make his point or issue his denial, often with a piece of tape from a newscast or press conference to support it.
Let’s say his subject claims, “I did not support opening trade with Cuba.” Jon runs the statement, lets that sink in, then disproves it hilariously by using video of the guy sneaking off a flight from Cuba with four boxes of Cohibas under one arm and a sexy marimba player under the other.
More often he’ll use a cascade of clips letting his victim provide examples of his duplicitous behavior. Lately my new favorite late night host has been adapting some Stewart techniques and attitudes. This week he did a desk bit that lampooned both the buffoon d’jour—Donald Trump—and those buffoons d’tout le temps,  Fox “News” Channel, over Trump’s candidacy announcement.

It started with a couple of sexist comments by Fox’s panel of “experts,” followed by a clip of Captain Hairdo saying “I’m a very rich man” worth more than $13 Billion. I’m not sure if Trump is totally unaware how he comes across, or is a brilliant parodist. But when he followed with “I’m not bragging, I have no reason to brag,”  the Blowhard with the blowaway hair set up Stewart’s putaway perfectly: “There’s a word for saying you’re not bragging because you don’t need to brag…it’s called ‘bragging.’”

While it is much too early to tell if it stays this way—Colbert isn’t even back on the air yet—my early vote for best of the new breed of late night hosts goes to… Seth Meyers of "Late Night."  Despite Fallon’s genius for impressions and overall hail-fellow-we-love-this-guy enthusiasm, I’m beginning to think Meyers wears better, has smarter humor, and keeps improving.

Unaltered Photo: Some Rights Reserved by the US Army Flickr photostream, The Sage nor this article endorsed. The original image can also be found here.