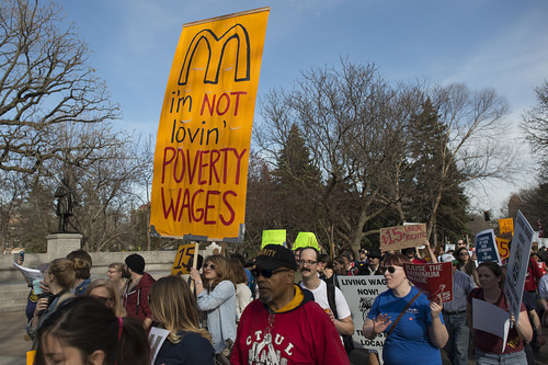 Photo: They deserve a break today

(SNN) Washington, D.C. – The Bureau of Labor Statistics has released its monthly employment report, and the White House is proud to announce 120,000 new jobs that will keep employees in perpetual wage slavery.

“Just one month ago, 120,000 Americans were trapped in crushing poverty,” White House Press Secretary Josh Earnest told reporters this week. “Now each one of those citizens is able to work to sustain that crushing poverty.”

“People who started off poor have now become the working poor,” he added. “That’s the American Dream.”

The new private sector jobs, which offer low pay, no benefits, and no upward mobility, will boost the economy by creating new consumers for Walmart and McDonald’s. And workers will have the opportunity to work part time at non-union jobs with no pension.

The increase in jobs that barely cover expenses and offer no possibility of savings has been partially attributed to the president’s recent Jobs Act. President Obama told reporters earlier this week how proud he was that his administration helped the unemployed get terrible, unrewarding jobs.

"These folks were unemployed before,” the president told reporters. “Now they are employed. Every American deserves a paycheck they can use to buy nutritionally void food for their family.”

These new jobs are a welcome achievement on both sides of the aisle. Republicans and Democrats alike look forward to using the new numbers against each other. The White House has taken full credit for the jobs, while Republicans say the president could be doing more.

At press time the US government had announced its plan to end hunger in America by giving every citizen a bag of peanuts.

Unaltered Photo: Some Rights Reserved by Fibonacci Blue Flickr photostream, The Sage nor this article endorsed. The original image can also be found here.