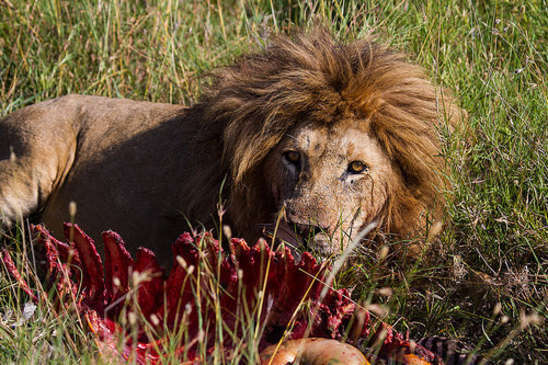 Photo: A lawyer after explaining the Law of the Jungle to his client.

(SNN) Social media erupted this week when American dentist Walter Palmer posted a selfie with Cecil, an African lion he hunted and killed. The photo has launched a movement to stop the senseless killing of monsters that would eat human babies alive given the chance with no remorse whatsoever.

Activists have posted signs at Palmer’s dental practice and used Facebook and Twitter to show their support for the slain heartless killing machine that is literally the reason children have nightmares. Supporters say it was wrong to glorify the killing of this four hundred pound beast with daggers for teeth.

“It’s just wrong,” said Darren Walton, Director of People for the Ethical Treatment of Demonic Jungle Monsters. “That poor, defenseless lion was living a peaceful life of killing its own offspring and ripping antelope to shreds as they consciously looked on at the process of their own horrific demise, and this American comes along and shoots him.”

Cecil was a vicious behemoth of a creature crafted by evolution over millions of years to deftly end the lives of its prey without a moment’s hesitation, and the world is sad to see him go. He lived in Africa, where millions of human beings suffer from starvation, disease, and oppression every day, on a game hunting reserve designed to manage and preserve animal populations.

“We need to put an end to trophy hunting,” said Walton, making no mention of the thousands of people dying in Africa at this very moment. “It’s nothing more than rich white people exercising their privilege by a cowardly show of dominance over innocent animals.”

“[Nothing],” he added in regards to the ongoing problem of police brutality against the African American community.

Activists declined to comment on the hoards of less cute trophy-hunted animals who didn’t have anthropomorphized names.

Unaltered Photo: Some Rights Reserved by Kayugee Flickr photostream, The Sage nor this article endorsed. The original image can also be found here.