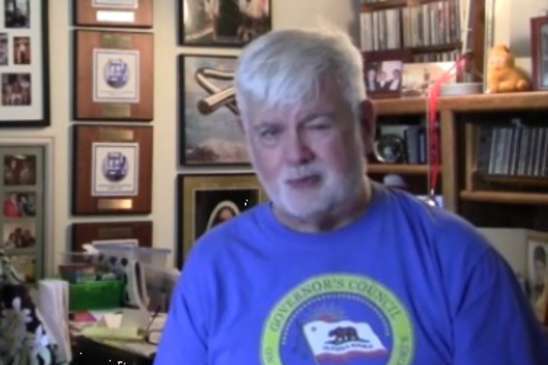 Photo: The Bastion of Comedic Jocularity and Funny Stuff

(SNN) I try to avoid watching 24/7 news networks or the locals as much as possible for health reasons. My doctor said my blood pressure rises high enough to catapult a jet off an aircraft carrier during Wolf Blitzer and “Fox & Friends.” Also my torn rotator cuff came from tossing large objects at my TV.

I’m a news junkie, so where to now? The best go-to place is gone--“The Daily Show with Jon Stewart.” Jon left the show, apparently to emcee Wrestlemania events. (True—it was his first gig since leaving)

I’ve found a new place. It’s called Comedywire.com. Each day they link to scores of news items, admittedly most often bizarre—and invite members to write jokes about it. At last count there were 3400 members,  mostly comedians, comedy writers, humorists and wannabees. Top vote getters are listed each day. I joined and contribute most days. But be careful, it’s addictive. Here some of my recent entries.

The problem with police body cameras is…

Many police don't have bodies worth looking at.

“Another take? We'll have to shoot it next week.”

Top 10 Animals You Would Be (And Why)

Write A (new) Slogan For A US State

'You Look Smart' And Other Almost Acceptable Catcalls

When he gets out, he'll be honored by the Actors Guild as Man of the Year

Killer cannibal reveals he cooked women in stews and pies; says it's the same as eating beef

"Pie for dessert? We may be out of pie. Let me check with Miss Wilson. Oh wait, silly me, dessert IS Miss Wilson.”

Not to be outdone, Penn & Teller now pulling a turkey out of a Patriot missile.

Meanwhile, at City Hospital, her husband had his tires rotated.

...only those who posed as a Playboy centerfold.

...where they were greeted warmly by Father Fondle.

Experts reveal six words women hate the most - can you guess them?

“That’s what my first wife said.”

BMW owns Alphabet.com and it's not selling it to Google

Google has regrouped and decided the new company name will be "GeneralElectric.Com"

No wonder it was longest, it was chanted to tune of "Free Bird."

Honest, I wrote a joke down about this, but it was washed away by tears of despair for the human race.