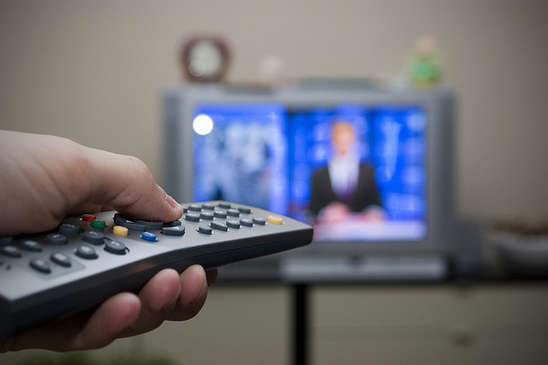 Weirdness and Violence No Stranger to Newsrooms

Photo: A look behind the gleaming sets

(SNN) The death of the two journalists during a live shot recently resonated especially with anyone who ever worked in TV News himself.  As a critic on television, my biggest danger was getting the stink-eye from an actor I’d reviewed unfavorably or the heartbreak of “Kernel Gums” from all the popcorn I ingested.

My first job in television was located in a former bowling alley in Washington, DC, with several stories of unused offices below, once occupied by nuclear spooks during the cold war.  Now they were home to freeloading Raccoons who came upstairs nightly for handouts.

These were different times in TV journalism, and it took a lesson for management to learn not to leave the entrance unlocked and unmonitored. One day some dude wandered in off the street onto the news set during a broadcast—perhaps looking to rent bowling shoes.

Management then hired a 95-pound receptionist to cut future threats off at the pass.

But danger could occur from within, too. An anchor once chased a producer around the newsroom while holding a pair of scissors. This violated at least two laws--attempted murder and running with scissors.

Turnabout turned out to be fair play.  Another night saw another producer stalking another anchor in the same newsroom. The unarmed yet well-lubricated producer just sat next to the anchor and glared at him. When the anchor changed seats, so did the producer.  Soon the anchor tired of the game and called the police. The ensuing epithet-filled tirade in the hallway interrupted the taping of a religious program in a nearby studio.

At times during my stay there, people would chase one another around the newsroom with loaded pistols. Okay, technically they were squirt guns filled with water, but the battles could be intense and escalated, inevitably, to water balloons.

One of the better sneak attacks was to thoroughly soak the office chair of your opponent. The chair seat was made of a black, absorbent fabric that did not change color or appear wet when loaded up. Wet bottoms and hilarity ensued.

Once a reporter (whose nickname was “Madman”) had the station helicopter fly from the airport to the station so a tape could be dropped off and make air on the early news. (This was before microwave news feeds). Only trouble: No heliport or landing pad within a mile of the station.

On arrival, Madman ordered the assignment manager and an intern to race up to the roof with a Red Cross emergency blanket, open it, and catch the tape he’d throw down from the hovering chopper. Seemed like a great solution until the blanket was opened, got caught in the downwash and inflated like a spinnaker. Both men were nearly blown off the roof. Despite that setback, the story made air.

Another reporter was injured during an ice storm when she slipped and fell outside the station, breaking a bone in her back.  An ambulance was requested but all were on other calls, so dispatchers sent a fire truck instead.

A rival station, hearing this news on the two-way, believed our station was ablaze, and sent over a camera crew. They recorded the reporter being carted off in the fire truck. Our newsroom had to beg, borrow or steal that footage of their own reporter’s rescue.

We had a good relationship with local police, mostly through an officer who appeared on air each night with “Crimewatch” reports. When I started getting rambling, semi-coherent letters that could be interpreted as threatening, I asked Officer Crimewatch for advice.  “I’ll ask some friends to see what they can find out.”

Later that day he told me the writer had a criminal record and his police buddies would pay him a “little visit.”

The next day I received a special delivery, extremely coherent letter from the guy apologizing profusely, saying he never meant anything as a threat and promising never to write me again.  When I thanked Officer Crimewatch, I asked what his friends had done to bring about such a change in attitude. His response. “Probably better you don’t know.”

Out of the Closet

This last anecdote is scary enough to be fodder for a true crime movie. It involved a female anchor at the station who was nothing short of stunningly beautiful and married to a network correspondent.  She received scores of inappropriate letters and was even stalked by a man who was tracked down and issued a restraining order.

After a weeklong vacation together, the duo returned to their condo. The woman opened her closet door and the stalker—concealed inside—leaped out at her. Fortunately, her husband was able to subdue the man who was eventually jailed.

So while the nightmare in Roanoke makes news, the business itself is more dangerous—and downright weird—than outsiders will ever know.

Unaltered Photo: Some Rights Reserved by Flash.Pro Flickr photostream, The Sage nor this article endorsed. The original image can also be found here.