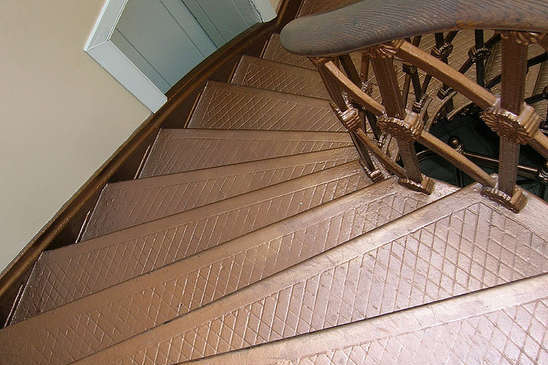 The Dog Who Tried to Kill Me

Photo: The scene of many attempts on Cork's life

(SNN) We used to have a dog that was cute, sweet, even spirited and a happy addition to the family, except for the fact she was usually trying to kill me. This is an account of the time she almost succeeded.  I was on crutches for three months following ankle surgery, and—credit where it's due—the dog seized that opportunity. I took notes and now I invite you to pay close attention to this cautionary tale.

The dog is trying to kill me. You heard me.

That may sound a little paranoid. But in actual fact, the dog is trying to kill me. And I have evidence appertaining thereunto, may it please the court.

I'm so certain the bitch is trying to off me I've tried to bring her up on charges. Unfortunately, according to the District Attorney, a dog cannot be prosecuted for attempted murder. At least, I'm pretty sure that's what he was trying to say between fits of hysterical laughter.

The dog in question is Cassie, a mix between a Corgi and a Cocker Spaniel. Or perhaps a Golden Lab and a Corgi with a stepladder. Let’s just call her a Corgi/Cocker mix and dub her a genuine "Corker." See what I did there? I get my enjoyments where I can.

Cassie was very short, had stubby legs, and a handyman once said of her, "Ah, you've got a low-rider." She had a huge tail, an insatiable appetite and the intense, cold, soulless eyes of a contract killer.

If you’d met her, you would have taken her side. For one thing, she loved strangers, and for another I am a cranky old coot and not very likable myself. She'd lick your hand, something I’ll never do unless you've been eating a jelly donut recently. She'd wag her massive tail, and win you over in an instant. Advantage pooch. A dog doesn't have to be Lassie to top me in a popularity contest.

As a visitor, however, you never saw her dark side. You’d think she is a near perfect pet. I’d agree except for the fact she is trying to kill me.

I had been on crutches for about five weeks. It took Cassie two days to figure out my new vulnerabilities and begin her campaign of homicide.

These were well-planned forays, not random incidents. I've got times and dates in my notebook. Or at least I had them until she ate the evidence.

The passive one is called "Trip the Gimp."

"Trip the Gimp" consists of leaving her chew toys in unexpected places.  Sometimes she leaves them along the path my crutch will take. This makes it likely I’ll stub a crutch and topple forward. Or get distracted by it and trip over something else. I'm easily distracted--bees farting outside my window have been known to distract me.

"Oooh, look, farting bees," I'll shout to no one in particular, and hit the deck.

The pro-active murderous practice the dog uses to try to kill me  is her "dart and pounce" technique. 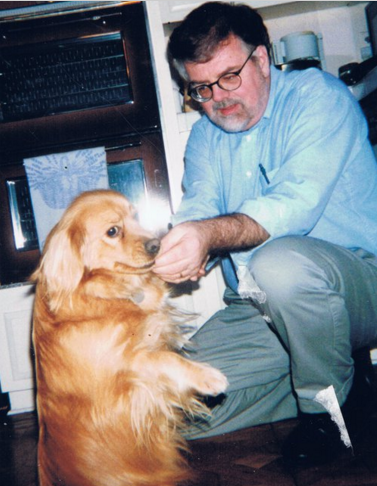 “Excuse me, coming through...oh were you trying to walk there?"

Sometimes she'll pretend she is yielding to me, then dart in front of me. Other times she'll sprint back and forth in a game of "dodge the dog." But I can tell by the determined look in her beady little eyes that this is more than a game to her.

Since one of the crucial elements of premeditated murder is motive, I imagine you wonder why the dog is trying to kill me.

Simple. My wife is the Alpha around here. Cassie knows all she has to do is knock off Dad, and she's #2.

My lovely wife laughs at my theory, claiming I'm paranoid. To her I say, just you watch it, sister. Because if Cassie gets away with whacking me, you're next.

Obviously, Cassie never did murder me. She died of old age at fourteen.

I know what you’re going to ask. Yes. Yes, I did. Like a baby. And with each passing day, I forget the attempted homicides and remember the good times. Won’t be long before I think of her as the best doggie ever. Who’s a good girl? Yes you are… Bestest doggie ever…

Photo: Some Rights Reserved by Lisle Boomer Flickr photostream, The Sage nor this article endorsed. The original image can also be found here