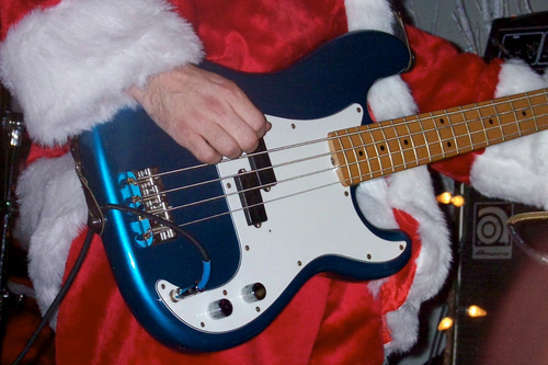 (SNN) As I write this, it is 88 degrees here in Southern California and not yet Thanksgiving, which means the malls and radio stations are already filled with the sounds of the Holiday season.  The roar of freeway traffic is joined by the gentle bellows of those concerned about what Christmas Season greeting should be on their  $4.50 cups of coffee.

You know what that means? It means it is  time for Cork’s Top 15 Christmas Musical Favorites List.

Warning: I've got eclectic taste, a willingness to dig deep into the oldie vaults, and a get-off-my-lawn attitude.  I know some of you will despise my choices or scoff at the versions I’ve chosen. I expect others will sit partially agog slurping Eggnog because I didn't pick your favorites.

I’m okay with that.  Just admit my (randomly ordered) list below is better than yours.

Blue Christmas—Elvis Presley. You‘ve heard of him? He brought rock and roll to Christmas and vice versa. His first album of Christmas tunes was released in October 1957, and this one is the pick of the litter. Despite rumors, the original album title was not “One King Sings about Another.”

All I Want for Christmas Is My Two Front Teeth.—Spike Jones  I could claim this represents all those holiday novelty songs released over the years, but that’s not why it made the list. It’s here because for three years I lived a few doors down from Don Y. Gardiner, who wrote it. Nicer man or better neighbor you’d never meet. Yeah, it’s that kind of list.

Christmas (Baby Please Come Home)—Darlene Love. Darlene is a wonder of rock and Roll and owed her long-overdue comeback to David Letterman, who declared this the only Christmas song he listened to and had her sing it on his show every Christmas for a couple of decades.

Song for a  Winter’s Night—Sarah McLachlan, Gordon Lightfoot. A pleasant little tune written in his hotel room by the great Canadian troubadour during a thunderstorm on a summer night in Cleveland. It was recently taken up into an ethereal stratosphere with a haunting arrangement and the voice of Sarah MacLachlan.  Love both versions.

Carol of the Bells—Mormon Tabernacle Choir: You need the big stereo for this. Starts with quiet carillon, then the French Horns tip-toe in before the huge-wall of Sound arrangement blasts through. Best version I’ve heard, but it is a great carol even Justin Bieber could not ruin.

Run Rudolph Run—Chuck Berry.  This sounds much like every other Chuck Berry rocker—that’s a compliment—except this one is about Christmas and that reindeer with the big red nose. One of the toe-tappingest Christmas songs ever from one of the greatest rock and roll pioneers ever.

I’ll be home for Christmas—Frank Sinatra. The voice, interpretation, musical class, and Gordon Jenkins arrangement are about perfect. This beautiful tune is worthy of the Sinatra treatment, and evokes like few others, the loneliness of Christmas away from loved ones.

All Alone on Christmas— Darlene Love and the E Street Band. Yup, Darlene double dips on my list—what can I say, I love the old R&B.  Ms. Love belts this with Springsteen’s E Street Band.  A rollicking, unforgettable number that appeared in the forgettable “Home Alone II.”

Christmas Time is Here—Vince Guaraldi  He’s the later piano great who provided all the music for the Charlie Brown TV specials.  Instant Nostalgia. This song feels like the shopping’s done, the kids are in bed and you are standing outside in a misting snow with your toddy.

Mary’s Boy Child—Harry Belafonte A Caribbean Islands-style carol. It’s a goose-bumper, a perfect fit of lyric, music and voice by a man who was a great singer before he became better known as a great human being.

Have Yourself a Merry Little Christmas—Judy Garland. If you only read the lyric sheet you’d never suspect what it is about, but in musical and dramatic context, it may well be the most heartbreaking Christmas song ever recorded.  Garland’s voice fits it perfectly. From the movie “Meet me in St. Louis.”

Light in the Stable—Emmylou Harris: Would not have made my list were it not for the incredible Emmylou Harris, whose voice makes you believe if Angels literally inhabited the earth, this is exactly how they'd sing.

Oh What a Beautiful City—The New Christy Minstrels  This Gospelly country tune can get hooked in your brain. The New Christy Minstrels, a goodtime chorale of folkies from the sixties, nail it.  Enjoy this one, or, if you’re tired of the Christmas spirit, try former Christy lead singer Barry McGuire’s grim “Eve of Distruction.”  On second thought, don’t.

White Christmas—The Drifters By law, this song has to be on any Christmas song list—but  forget Der Bingle. The version I love is by the legendary R&B group The Drifters. It sounds kind of like traditional R&B until the incomparable Clyde McPhatter takes over the lead and makes it joyous, fun, and unforgettable.

(The Editors of the Sage do not endorse or agree with any of these selections other than the one about that Charlie Brown guy.)

Photo: Some Rights Reserved by porcupiny Flickr photostream, The Sage nor this article endorsed. The original image can also be found here.