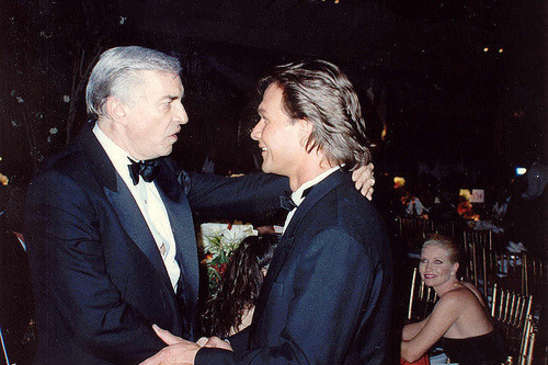 (SNN) Directing a movie is a little like playing Bridge. In Bridge you must be able bid a hand properly, and then play it brilliantly.  In directing a movie, you better cast the right people in the right roles, and then, of course, play your hand.

In two notable instances, both involving the director Woody Allen, part one of that directing equation almost did not happen. To add to the matter, it concerned two of his very best movies—Crimes and Misdemeanors and Bullets over Broadway.

The former is probably my favorite Woody Allen film. It stars Martin Landau as Dr. Judah Rosenthal.  He is the moral center of the film and gives a brilliantly nuanced performance. Landau creates a character rarely played successfully in film, the man who commits absolute evil, yet keeps an audience’s sympathy, or at least understanding.  The moral dilemma of this compelling, complex protagonist is the foundation upon which Crimes and Misdemeanors is constructed.

Landau almost talked himself out of the role.

Martin Landau became a television star on the hit series Mission Impossible, which ran from 1966-1973. Back in those days, there were primarily two kinds of successful actors nationwide—TV actors and movie actors. Once you became known as a “TV actor,” according to the geniuses who ran the entertainment industry at that time, you should not be cast in a movie because people won’t pay for what they’d been getting for free.

And while some gifted actors escaped TV for the Big Screen, Impossible linked Landau to television for years, and good movie roles were hard to come by for him

Then, in1988, he gave a terrific performance in the movie Tucker: The Man and His Dream, and caught Allen’s eye. He was invited to New York to talk to the filmmaker about playing the lead role in Crimes and Misdemeanors.

Allen is very secretive with his scripts and sent it over to Landau’s hotel room the night before they would meet. A messenger stood by to retrieve it once Landau had finished reading.

Landau was blown away by the thought of playing the morally conflicted eye doctor who had his own brother hire a hit man to kill the mistress threatening his comfortable life and position in society.

Landau had his meeting with Allen set for the next morning, and scheduled his flight back to LA that afternoon.

Allen told Landau how he envisioned the character he wanted him to play—and Landau’s heart sank. Allen said he perceived the character as a kind of Edward G. Robinson tough guy type. Landau couldn’t believe what he was hearing.  Landau had studied under legendary acting teacher Lee Strasberg and had been an acting coach himself for, among others, Anjelica Huston and Jack Nicholson, as well as head of the Hollywood branch of the Actor’s Studio.

Allen then asked him what he thought of his vision of the part.

“It was as if I had two little figures perched on my shoulder,” Landau said. “One was whispering into my ear, ‘Shut up Martin, this is a great opportunity for you. Starring in a Woody Allen movie? Take the part.’ But the other was telling me the director was wrong in this matter. In effect he was killing his own movie.”

Shut Up, Martin, he thought

Landau said he next heard a voice he recognized as his own telling  Allen—who had written, would direct and co-star in the film—he was off base in his approach to the character.

“You have a man here who has embezzled from his company, cheated on his wife, and conspired with his own brother to have his lover killed in cold blood. If he is not played as an empathetic character, you have no movie. He cannot be played as a thug.”

Allen sat silently for a few moments.  The words Landau had dared speak hung in the air as the actor started making plans for his next audition.

“What time is your flight back to LA?” he asked.

“Uh, in a couple of hours,” Landau replied. He was dead. It was over. He’d blown it.

“Okay,” Allen said. “Let’s get that postponed so we can get you fitted for your costumes today.”

And just like that, Landau had been hired to play a role he ended up owning, and which should have won him the Academy Award. (He won in 1994 for Ed Wood.)

I well remember the time I interviewed Dianne Wiest for Allen’s Bullets over Broadway, which earned her a second Academy Award as supporting actress. (The other was for Allen’s Hannah and her Sisters.)

I was surprised to learn she had almost quit the movie. Unlike Landau, who stood up for himself to Woody Allen, Wiest stood up for Woody.

After filming had started, she realized she didn’t have a clue how to play the part. She could not connect with her character. She could not come up with an emotional voice or physical image for that matter.

"During production, when Woody isn’t talking to you about the role you are playing, Wiest said, "you are doing fine. But when he does talk to you, it’s because he’s worried something is wrong."

Wiest had gotten the message but try as she might, she could not sink her psyche into the part.

“And then I decided I had to quit,” she said during the interview.  She felt—and history has shown—it was one of Allen’s very best movie scripts. (He’s since turned it into a Broadway Musical) Wiest felt her fellow actors were spot on and she wanted to quit because she felt she might ruin the movie.

She decided to tell Woody she was leaving but first she vented to her hairdresser.  She needed a sounding board.  She got three words of great advice in return.

“Just do Tallulah.” Bingo. Instead of resigning, the next day she channeled the voice and attitude of the legendary Ms. Bankhead. Among her key decisions was to deliver her signature “Don’t speak!” line in the lowest register possible.

Allen stopped talking to her, she nailed every nail there was to be nailed, and the result was her shoo-in Academy Award and comments like “she made the movie” being tossed around.