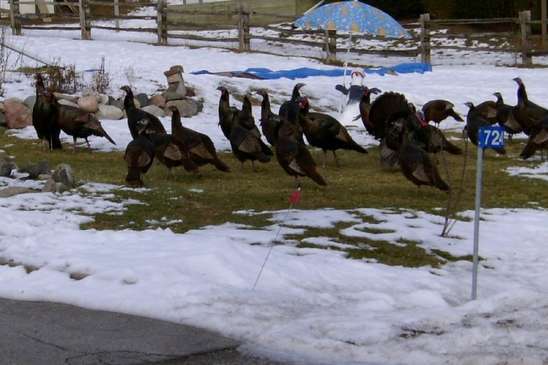 Photo: What do you call a group of turkeys? A Film Retrospective!

(SNN) Why snarky old excerpts now? Because kids today are under the misunderimpression that Snark was invented last week—a month ago, tops.  Nothing could be further from the truth, except of course, Donald Trump.

I know this to be true because I was Snarking before dinosaurs roamed the earth—maybe not the entire Earth, but certainly many parts of New Jersey.

So, below, instead of unbroken-in Snark, is genuine aged Snark, applied to oldy but no-goody movies I reviewed ages ago.  (Don’t worry, none of this will be on the final)

THE SILVER BULLET. The Lone Ranger left ‘em, beer drinkers quaff ‘em, and only suckers will pay to see the movie version.

ONCE BITTEN—It is safe to say that if you have cracked ribs, this film presents no danger of re-injury.

GODZILLA ’85—Hard to give an overall rating. Artistically, this movie ranks somewhere between a minus two stars and root canal surgery. But, as a go-with-your-friends, hoot-at-the-screen night out, I’d have to give it three stars. Let’s just say this Beast from the East is one of the best of the worst.

COMMANDO—Fans of senseless violence are a fickle lot. These days it isn’t enough to merely blow someone away with, say, 30 machine gun bullets to the sternum. Today you have to kill ‘em with bullets as you kill ‘em with one-liners. The latest stand-up, shoot-down comedian is Arnold Schwarzenegger.

REAL GENIUS— About two-thirds in, I noticed an enormous crunching sound. I assumed at first the picture tried to change gears and the director had missed a shift. But no, it was my worst fear, the sound of axes grinding. And what had been a bright, clever, good-natured and funny comedy about some “geniuses” at a college Think Tank had turned into a Message Movie.

INSIGNIFICANCE—I didn’t much like this new picture by director Nicholas Roeg. I know, I know, some critics worship the water they say he walks on. My problem is I can see the pontoons attached to his Guccis.

NATIONAL LAMPOON’S EUROPEAN VACATION—Dana Hill plays the daughter. It’s a role an actress would kill for…kill her agent…kill her manager…

RED SONJA—I don’t want to say this is a disaster of a movie, but it’s first time I’ve seen the Red Cross outside a theater passing out sandwiches and blankets. Is the acting any good, you ask? Hey, could Shakespeare play golf? Was Einstein a snappy dresser? Does a bear drive a cab in the woods?

MAD MAX BEYOND THUNDERDOME—Mel Gibson can act a little, but apparently chooses not to here. As his opponent, there is Tina Turner, who emotes like she’s about to break into a few quick choruses of ‘Proud Mary’ at any moment.

WEIRD SCIENCE—John Hughes wrote and directed “Sixteen Candles and “The Breakfast Club.” Hard to believe he directed and wrote this, too. Wrote? If you can burp it, belch it, expel it or excrete it, there are ten bad gags about it onscreen.

BOLERO—The plot, such as it is, concerns a young woman’s quest to lose her virginity. She’s played by Bo Derek. In Hollywood, that’s called casting against type. A critic once said of another actress, “She runs the gamut of emotions from ‘A’ to ‘B’.” Bo doesn’t quite display that range.

"I am in the prime of my senility"

Photo credit: Some Rights Reserved by Robert Taylor's Flickr photostream (well worth a visit). The Sage nor this article endorsed. The original image can also be found here.