The Fire This Time

Photo: What some guys will do to get a scoop

(SNN) The recent brushfire in Calabasas CA, was not the first nor the worst one that the community has seen. The author well remembers an earlier one, which he helped report.

When my daughter-in-law called this past Saturday and said  "You may already know this, but there’s a big brushfire near you,” my first reaction was; “Oh, wow, Déjà vu all over again.” It was a mere 23 years earlier when I’d gotten a similar call—this time from a producer at KCAL TV, where I worked at the time as the entertainment reporter.

On the 1993 call, I said “Let me look outside,” stuck my head out the door and saw a massive pall of dark smoke in the direction of Calabasas High School, about a mile away from our home. I had particular interest in this because my son, John, was then a student there.

I jumped in the car, roared off against the stream of students and teachers being evacuated. I pulled into the parking lot and spotted John, notebook in hand, interviewing people for a story in the school paper. Assured he was okay, he reminded me he had his car there and went back to work.   I soon spotted and flagged down a KCAL live van headed toward the fire. 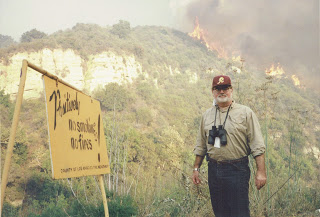 We stopped at the point of ignition, a water tank farm where other TV trucks were also scattered about, most of them packing up to go chase the fire toward Malibu.

A second KCAL truck headed out after them and we were left there to cover developments. “Cover developments” means leave the idiot entertainment guy there where he can do limited damage.

I poked around; saw some people who looked like fire officials huddled nearby.  A civilian peeled off and started walking toward me. I asked what he was doing, and he said “Oh, just telling those arson officials about the two guys in a pickup truck I saw here just before the fire started.”

Called it in, the station came to me immediately and I broke the story. Idiot entertainment guy, my foot.

Before too long, my reward was getting to go chase the fire into the canyons where it was raising hell. The shooters on the truck decided to give me a thrill and we were soon surrounded by flame, setting up for a live shot.  Meanwhile a fire engine heading past us stopped and the driver said, “I wouldn’t stay here if I were you, it’s right behind us.”

Uh, guys what do you think?

“After the live shot, we’ll move.”

They called the station and we discovered Hizzoner the Mayor was just starting a news conference and we decided it wasn’t worth risking our lives, and more importantly, a fully rigged live truck, while waiting for him.

Of all the senses most engaged as a brush fire does its thing, the one I didn't expect to be most memorable was the sound…. The crackle, the wind, the thunder of little bunny feet running for their lives, all combine into a medley that is unique.

It’s not rumbly-scary like thunder or artillery, but none-the-less threatening and ominous--like a hissing snake or gas leak--without being all show-offy about it.

Once back at the house, I called the station, making what I assumed would be an empty gesture to help out the next day. I learned that I’d been scheduled for six AM at the beach, there to report live.  Seems the A-Team reporters would be up all night and the scrubs had to spell them in the morning.

When I got to the rallying point that morning, I learned I would be sent to a Malibu hillside as backup to the live shots by the reporters about to head in to the firestorm shortly.

Funny thing about that.  Authorities didn’t let the media in until well past noon, so yours truly and the sports guy in a chopper had ourselves an all-morning telethon without the begging.

Happily I’m an aviation buff, familiar and able to recognize most of the aerial assets in use and was able to fill the time with aviation trivia instead of explaining how I got into TV or reeling off the top ten movies about fire.

After we’d been relieved, we were getting a snack when a guy spotted the logo on the truck and asked about the arson story. In one of those one in a thousand coincidences, he was one of the two guys seen at the ignition point in the pickup and he wanted to reassure everyone he was an auxiliary fireman, saw the fire ignite, and was trying to hook up to a hydrant to fight it until the trucks arrived.

He wouldn’t do an interview then, but later he and his partner were investigated by the arson specialists, and exonerated when the story checked out.

The next day, I was sent into the fire zone to do a feature on some people who's were affected by the fire. One was a cinematographer who also ran one of the biggest sprout growing farms in the area. He not only lost his sprouts but his film vault was destroyed, too.

We next stopped at the home of a Hollywood producer who had turned down an order to evacuate and stuck around ready to fight the fire with high-powered pool pump and a Freddie the Fireman Official fire nozzle. The flames didn’t reach his home, thus preventing a parboiled batch of Producer Pool Soup.

And last but not least, we interviewed some residents at a place called Elysium Fields, who were, alas, tastefully dressed for the interview. I mention that because Elysium Fields was a nudist colony, (since closed.)

I asked one woman what she would take with her if they had been forced to evacuate. She said, “turn the camera off and I’ll tell you.”  We did.

The Malibu-Calabasas fire of Nov 2-11, (aka The Olde Topanga Fire) killed three civilians and injured twenty-one others. 565 fire fighters would receive injuries, and 388 structures were destroyed.

When I think of the road we’re traveling on
I wonder what went wrong
I can’t help it, I wonder what’s gone wrong

Photo credit: Some Rights Reserved by the U.S. Fish and Wildlife Service Flickr photostream (well worth a visit). The Sage nor this article endorsed. The original image can also be found here.