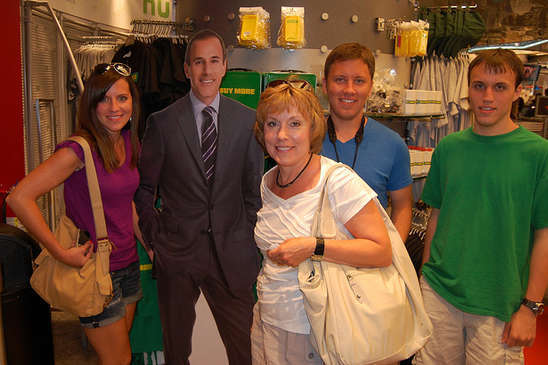 If Trump Wins Due to Matt Lauer Interview, It's MY Fault

Photo: If we only had a time machine.

(SNN) Editor's note: We've all done stupid things when we were younger.

If Donald Trump gets elected it’s all my fault.  I feel terrible about it. As this is written people are blaming Matt Lauer for his interview with Trumpster. No. It’s my fault.

I accept the responsibility.  Don’t blame Matt Lauer. See, I’m responsible for Matt Lauer and thus his soft-ball interview with Trump. Yeah, the interview could give Trump a bump, because, well, mostly because we’re a nation of Morons.  But it’s my fault. Honest. I will prove it with a proof that is yuuuuuger than any proof ever in the history of History.

Read on. Here’s how it happened.

Back in the late eighties I was employed as a Lifestyle Reporter at WNEV-TV, Boston MA. I did not enjoy my stay, nor they me, but that’s a story for another day.

Anywhooo…the peeps who ran the place decided it was time to start a morning yakker—which to you civilians means a “Morning Talk Show.” Local stations in major markets used to have these back in the day, some still do I suppose. But it became a losing battle when Today extended its broadcast to 14 hours-a-day and the congloms that own stations figured they can make more money running Infomercials and I Love Lucy reruns. And hey, that’s what we’re here for, right guys?

But it was considered a viable entity in the 80s.  Most shows had a perky male host and a perky female host. At least one of them was a dim bulb. Didn’t want to load up the morning viewers with too much thinking stuff in the early AM. As long as the host could run a cooking demo without burning down the studio, and didn’t spill their own coffee, they’re qualified.

WNEV-TV (now WHDH), after a nationwide search, brought in two Perksters and put the yakker on the air.  I don’t remember the name of it, let’s call it  “Howzit Hangin’ Boston?”

Smart broadcast media people figure a new show like this —local or national—takes time to find its viewers. Some take years. CBS Morning News is in its twelfth decade, I believe.

For whatever reason—they didn’t consult me—the show aired for a rip roaring three or so months before it was cancelled (As memory serves…it might have been a little longer).

I’d never been on the show. I don’t think I’d even watched it, but I felt sorry for the Perksters. Move to Boston, then get canned before they even learn how to pahk their Cah in Havahd Yahd?  That’s not fair.  So I trotted myself down to their offices and found  Ms. Perkster had already bolted but the glum male co-host was packing his stuff. Very bummed out. Mumbled something about getting out of the business.

I was the picture of empathy. Don’t get discouraged. You’re not to blame here. You never had a chance. Don’t give up the ship! Take two and hit to right! It’s not the size of the dog in the…well you get the idea.

And so did he. Armed with my encouragement he did not quit TV. You are probably ahead of me here, but that particular Perkster was Matt Lauer. He had his own original hair then, but it was Matt. He is one of the two most famous people to escape the place. (The other was a part owner about that time named Robert Kraft.)

When I said goodbye to Matt, I figured I’d never hear about him again. (I’ve never heard from him again, wouldn’t you know.) And now I’ve gone and helped mess up my country.

So I guess the lesson learned here is, when someone gets unfairly canned, tell them to get the Hell out of the business. The only other thing I got to say is Mea Culpa, Mea Culpa, Mea Maxima Culpa.

Photo credit: Some Rights Reserved by Ewen Erik Dorst Flickr photostream. The Sage nor this article endorsed. The original image can also be found here.