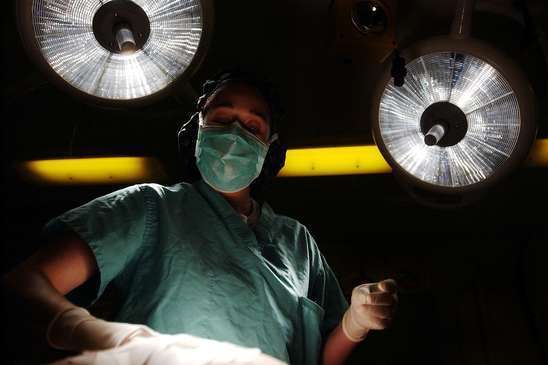 Trump: Worse Than a Poke in the Knee with a Sharp Scalpel?

(SNN) I am a glutton for punishment.

That’s why I scheduled a visit with an Osteopathic Surgeon the day after the Presidential election.  I figured if worst came to worst at the polls, the prospeceet of major surgery wouldn’t seem so bad.  Still not the sharpest tool on the workbench.

So November 12th, glum as bad pudding, I went off to see a specialist recommended by both my personal physician and my personal wife.  The doctor, I’d been told, is a world-class surgeon whose specialty is balky knees.

Did I mention I have a balky knee? My left one is so balky that every time I take the mound, the ump sends the runner to the next base.

My knee is no patella-come-lately, either. It’s been a pain in the grass and on the sidewalk for ages. I’d already gone through the entire array of knee replacement procrastination devices—MRIs, X-rays, physical therapy, Witch Doctor incantations, Cortisone, lube and filter, medicinal Scotch, braces, and a three-shot series of lubricating Silly Putty injections just this Spring.

When I arrived at the doctor’s waiting room, there was the usual massive TV screen facing its captive audience. These days many doctors like to supplement their income by running a thinly disguised infomercial telling you how just one dose of Flatulentazine can defuse gaseous buildup and cure your Prickly Heat.

As I watched the screen I saw skin being detached and lifted away from the bone.  Oh dear god, where’s an anesthesiologist? Forget the victim on screen, I needed one for me.  I was not in the mood to watch a gruesome medical procedure performed by some doofus with yellow hair festooned with spikes and a multi-color beard a pro wrestler would eschew.

“Can you please turn off the infomercial?” I asked the receptionist.

“That’s Guy Fieri deboning a bird,” she replied. “His Chicken Teppanyaki is to die for.”

I gave her my standard explanation for such misunderstandings—I’m a congenital idiot.

I was soon called into the doctor’s office and after a brief discussion of my medical history, the doc passed me a “recent X-ray of your knee” that my last doc had forwarded.

It looked exactly like the shattered grill of a wrecked 2016 Bentley Flying Spur W12 Luxury Saloon.

“My knee looks exactly like the shattered grill of a wrecked 2016 Bentley Flying Spur W12 Luxury Saloon,” I tell him.

“Oops. Wrong X-ray,” the doctor said, adding wistfully, “I loved that car. Here’s a shot of your knee.”

This one was more like it—it looked exactly like the shattered grill of a 1947 Nash Rambler.  The good doctor then pointed out where something called my “Meniscus” used to be—Meniscuses are the rubber baby buggy bumpers of the knee, designed to soften impact when walking, running or doing squat-thrusts. When they wear out they leave you with something known as a bone-on-bone condition.

Not to get too technical here, but a bone-on-bone condition in your knee is “a bad thing.”

He explained some recent advances in Knee Replacement Surgery. One of the primary improvements is to miniaturize the size of the parts and incision, and thus reduce the amount of muscle damage during surgery. This, I’m told, is “a good thing.”

It’s not like I’m going to leap off the  table and start racing around the operating room immediately, but I liked the improvements, the confidence the doc exudes and the fact I’ll now be able to walk directly to a bar without stopping.

First I’ve got to get through the holidays, lower some of my medical lab numbers, and lose some weight.  It seems I’m—what’s the medical term I‘m looking for?—oh yeah, “too fat.”

Meanwhile Doc will give me a new set of injections to hold me, using different fluids this time. I ask him is that “a little like putting a different kind of oil in a car engine?” He begins to weep over his lost Bentley, so I leave.

Now all I have to do is find a good recipe for lo-cal Chicken Teppanyaki.