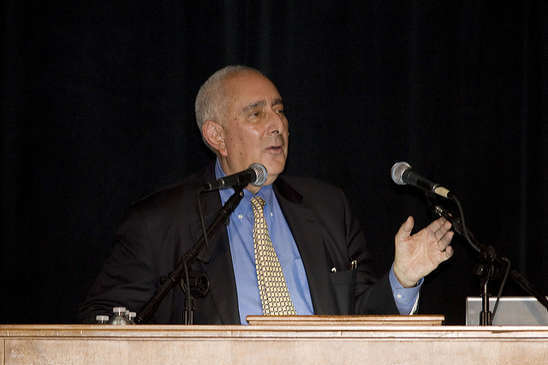 Two Ben Steins and a Battle of the Bullies

(SNN) Ben Stein has been in the news lately, recently saying Hollywood is a “Bunch of bullies and thugs trying to shut down anyone who doesn’t agree with them.”

I don‘t agree with Ben Stein’s politics, but I understand his sensitivity to bullies.  Someone once told me Hollywood may have saved him from a beating or worse from actual bullies. Who would tell me that? Ben Stein.

The back-story: Many years ago when I was a television entertainment reporter, I interviewed Stein and found him likeable, funny and gracious.  He even put out a spread for the camera crew and myself. We’re talking silverware, real china, pastries, cheese, lox and bagels.  Many other days you could find him on Hollywood movie lots, schlepping around to one casting call after another.

Doesn’t sound like a man who hates Hollywood to me.

Could it be there is more than one Ben Stein?

There is the former presidential speechwriter (for Richard M. Nixon), now an economics advisor, Conservative columnist and Right Wing pundit.  But if you check the Internet Movie Date Base (IMDb), you’ll find a Ben Stein who has enjoyed a thriving career as an Emmy-winning game show host, (“Ben Stein’s Money”), and commercial pitchman (“Clear Eyes”); and as a veteran character actor seen in more than 80 movies and TV series.

Actually there’s just the one: both Ben Stein’s live in the same body.

After working as a speechwriter, professor and lawyer, Ben decided to pursue his acting muse. His big Hollywood break came when he was brought in for a bit part in a movie. But instead of reading his line and leaving, he stopped the movie in its tracks—literally.

He did it with a single word repeated over and over.  No sooner would he open his mouth when the director would yell “Cut!” because people on the set—other actors in the scene, camera operators, etc—kept ruining the shot by laughing at Stein’s monotous, boring delivery.

Luckily for Stein, the movie was a comedy--one called Ferris Bueller’s Day Off.  They not only didn’t fire Stein, but over the years, that line—“Bueller?... Bueller?... Bueller?” — has entered the pop culture hall of fame as one of the funniest and most quoted moments in movie history. And as you shall see, the line not only launched his acting career, but may have saved his life.

Stein is a devilishly funny actor. Not a lot of range—I wouldn’t want to see him cast as Hamlet or King Richard—but in his character actor niche, nobody does Ben Stein better than Ben Stein.

During my interview with him, he was self-deprecating, and utterly certain of which career he enjoyed more—Show Business.  I observed, “You are a wonderful character actor, but does it ever bother you that you aren’t considered a leading man type?” He looked hurt and then sheepishly responded, “Well, in my own life I’ve always thought of myself as the leading man.”

Then he related the potentially fatal incident where Stein's fame drove off the bad guys--just like in a Hollywood movie.

Stein was in a small town in the midwest doing research for a story he was writing. He lost track of the time one evening and was walking back to his hotel from the library when he saw three guys headed toward him on the same sidewalk. To add to his worry, they were skinheads, muscled, tatted up, and appeared looking to kick ass.

Stein thought for a moment he should cross the street and avoid the confrontation.  Stein is not only Jewish—who Skinheads are not fond of--but his hangdog expression gives him a look that fairly shouts—“steal my lunch money and beat me senseless.”

But Stein is no coward. His mind flashed back to some of the suffering endured by people like himself over the years at the hands of bullies—individual and state sponsored. He felt he should not run.  This was America. He had as much right to that sidewalk as anyone. But as the men drew closer Stein realized the street was otherwise empty. If they wanted to attack him, who would stop it or sound the alarm?

They grew closer. Stein could see they were staring at him hard and not smiling. They even appeared to spread out as they got closer. They covered their mouths as they talked.  Stein stifled the urge to just turn around and run.

A few feet away, now... Moment of truth. He would not look away, nor cast his eyes downward. He looked straight at them, holding their stare, his face neutral he hoped, not showing any fear.  Stein braced himself, he would fight back, but it would be futile, he knew.  He said a quick prayer to allow himself to accept what was coming.

They were mumbling something, now…not quite loud enough to hear…    something rhythmic…an attack plan, perhaps?

Here it comes, he thought, as they closed in on him…

And then he heard them…were they chanting?  It was one word, over and over again and as they passed, they smiled as they said:

Photo: Some Rights Reserved by Murray State University Flickr photostream, The Sage nor this article endorsed. The original image can also be found here.