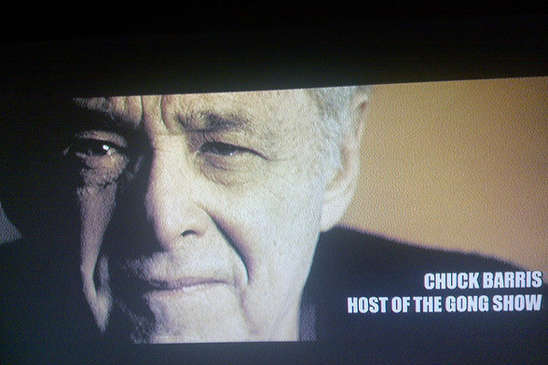 Last-Time Chime for the Gonger-in-Chief

(SNN) When I was a young writer I did entertainment pieces for the Dow Jones owned, late, great, and lamented, The National Observer. That was a weekly national newspaper, now long out of business, but a prototype for the type of publication that reached fruition with USA Today. I was there when "The Gong Show"--hosted by Chuck Barris—who just died at age 87—debuted on NBC. I was assigned to review it.

My problem as a reviewer was the show was pretty gawdawful, but dammit I enjoyed watching it. Call it a guilty pleasure, or a relatively harmless drug when taken in small doses. And, back before the deluge of similar programming inundated the current 800-channel Universe, kind of a rare deep dip into the world of marginally talented and tasteless entertainers.

You could say it was “wink-wink” bad.  Barry--who also produced it--knew it was bad, and let us in on the secret by metaphorically winking at us. He hosted with a "Hey, we're just having fun, y'know?" attitude and showed the smarty-pants tuning in that his kind of “bad” allowed him to laugh all the way to the bank.

Since the Dow Jones extra cash spigot never seemed to reach The National Observer, I wrote the review without getting to see the show in person or meeting Barris. At this point in time, I can't lay my hands on a copy of the piece. (It's probably in my files somewhere, or in the garage under the Buick.)

But I recall I did my critic’s duty by harrumphing at all The Gong Show’s faults, shortcomings, and affronts to civilization.  I then added, "...and I wouldn't miss it if my house was on fire," to show everyone I wouldn’t be pushed around by the Good Taste Police.

The review ran and I watched the show a few more times before tiring of it. On one episode, Barris read a number of reviews it had received on the air. He ended by reading the insults I’d hurled, paused and then reported that I’d added that I “…wouldn't miss it if my house was on fire."

Then Chuck Barris roared with laughter, and I’m pretty sure he winked at me.

Photo credit: Some Rights Reserved by Mohammad Jangda Flickr photostream. The Sage nor this article endorsed. The original image can also be found here.