Sushi for Two - and Pass the Matzo 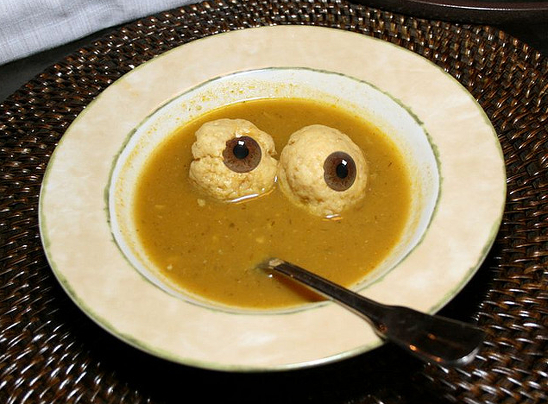 (SNN) - When it comes to trying different types of food, I'm not really adventurous.  I kind of like to know what I'm eating.  Where it came from.  What it's been doing all its life.  So when Wil said he was taking me to a Japanese restaurant to celebrate my birthday, I was skeptical.

Of course, I've been to Japanese restaurants before.  You know the sort.  The chef (who really isn't a chef - he's a contortionist from the Tokyo Circus) stands in the centre of the table (which really isn't a table - it's a grill, isn't it) practicing the latest kung fu moves from Saturday morning television.

You, on the other hand, spend your time ducking salt and avoiding becoming the target of the knife throwing show by smiling a lot and drinking copious amounts of rocket fuel sake.  With luck and perseverance, you topple off your bar stool just in time.

Unfortunately, this wasn't that sort of place.  Nope, this was the sort of place where you get to meet your meal before you eat it.  It might even swim out to your plate.

Wil grinned.  "Look, the place is filled with Japanese people.  The food must be great!"

Now, I have to admit, I've never quite seen the logic of that line.  So Japanese people are in the place.  And that makes it good?  What if they've all been BRIBED to be there?  What if it's a family concern (a BIG family) and Uncle Phil will go broke if they don't eat there?  What if it's the only place they can understand what people are saying?

Granted, it would be a little disorienting to walk into a Japanese resto and find it filled with - say - Germans speaking Urdu.  Sort of like going to an Italian Trattoria and being served by someone called Weinbaum.  "So...you want Matzo with your fettucini?  No? What, are you sick?  Hey Goldie!  Bring somma dat chicken soup over here."

We were led to a very dark corner and asked politely to sit on the floor.  Then we were given soup to eat with chopsticks.  Have you ever tried to eat soup with chopsticks?  Now I know why Japanese people are so slim.

"What's this?"  I said, spearing a little springy white glump with the chopstick.

"And what have they put with it?" I said gamely.

Wil leaned over.  "Looks like fish eyes.  But don't worry.  They're cooked."

Maybe that's why they use chopsticks.  Maybe they don't WANT to eat it.

Melodie Campbell writes funny books, including the 2014 Derringer Award winner, THE GODDAUGHTER’S REVENGE, which is available at Chapters/Indigo, and online everywhere.

Photo: Some Rights Reserved by Bart flickr photostream, The Sage nor this article endorsed. The original image can be found here.

More from Melodie Campbell
+ 1 tweet share
DISCLAIMER: The above article is provided for entertainment purposes only and the article, image or photograph held out as news is a parody or satirical and therefore faux in nature and does not reflect the actions, statements or events of real persons. The opinions, beliefs and viewpoints expressed by the authors of The Sage Satire and forum participants on this web site do not necessarily reflect the opinions, beliefs and viewpoints of the The Sage News Network or the official policies of the The Sage News.