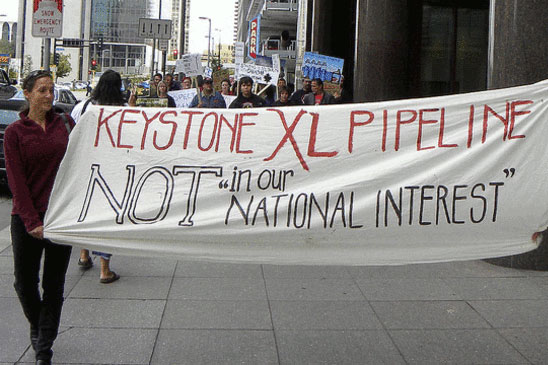 Alberta: Green-Washing or Enforcement . . . the Irony.

(SNN) - In the larger view of a provincial budget, $30,000 isn't a lot of money. The Government of Alberta and the companies so heavily invested in the oil sands stand to lose a whole lot more than that if Keystone XL is not built.  So the government’s latest effort to ensure the building of that pipeline (in the form of a paid ad in the New York Times) isn't surprising.

What is striking, however, is that one of the ad's focuses was Alberta’s “superior” environmental standards, making the argument that buying unrefined bitumen from Alberta is somehow more environmentally sustainable than producing more shale oil in the USA itself or importing from other nations.  The fact that Alberta spent the last decade spending more money and effort on green-washing our bitumen than actually enforcing regulations and providing leadership in sustainability is the true irony here.  Only lately we’ve committed to a world class monitoring system.  For years, both the Alberta government and oil and gas lobbies have worked to limit regulations on the oil sands.  Now we’re bragging about our environment record.

Because we refused to see the world changing… because we ignored the growing thirst for cleaner energies… because we’re so dependent on one source of revenue, we’ve painted ourselves into a corner, trying to convince potential markets that we’ve done enough on the environmental front.  The truth is that we have consistently missed our annual greenhouse gas emissions targets and we have given oil sands producers the go-ahead on 27 high-risk end-pit lakes in the Athabasca boreal region and virtually ignored the downstream effects of the industry.

President Obama and Secretary of State John Kerry have repeatedly said the economy of the United States must be built on a more sustainable energy future. The New York Times editorial last week (to which the Alberta government ad responds) argues that Keystone XL is the first project that should be turned down in order to start along the road to more sustainable energies.

If the Americans decide not to go ahead with the project, Alberta will be left with hundreds of billions of dollars invested in a commodity that will become increasingly hard to market.  We’re playing catch up because we never looked ahead.  We didn’t want to put environmental regulations and monitoring in place because of the costs to industry.  Now, our argument has become our “great” environmental record.  This irony should not be lost on Albertans.

Had we put as much effort into actually creating and upholding environmental controls and providing incentives for sustainable energy, our argument today might ring a whole lot truer.  Had we been more prudent in not allowing runaway development of the oil sands and had we provided as many incentives for greener energy in this province as we have subsidies and tax breaks for oil sands development, we would not have so many of our economic eggs in one basket.

No, it’s not the $30,000 the Government of Alberta has spent on the ad in the New York Times stands out.  There are billions of dollars at stake here and the government is only trying to protect potential revenue.  The sad irony is we all but ignored a changing worldview on energy and allowed runaway development of the oil sands without a parallel focus on our environment.  Now the world is wondering just how valuable our bitumen really is.  The writing is on the wall.  Will we continue to ignore it?  Much depends on the American decision on Keystone XL, but even more depends on recognising the changing global market for energy... and the consequences of not doing enough to defend against climate change and the environment.

Will Munsey is the president of the Alberta Party, a businessman and railroad engineer. His BLOG, the Berry Patch Perspective can be accessed HERE.

RELATED STORY: New York Times insert speaks to why Keystone XL is the Choice of Reason