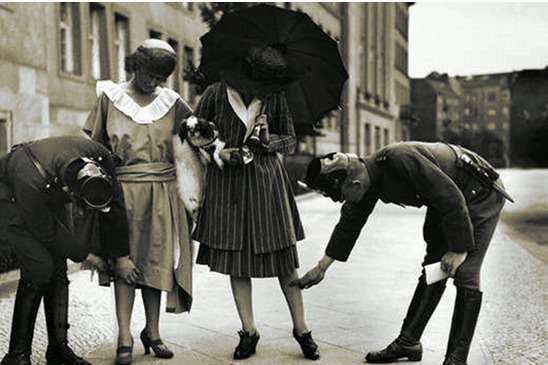 (SNN) - Brava, Premier Marois! With the release of the PQ’s Charter of Values you are proudly moving the Province back in time faster than Michael J. Fox. Being English born, I found it eye-opening to hear her state that a multiracial, multi-faith society causes people to ‘throw bombs at each other’, because they don’t know who they are. As someone that is English-Born, I don’t suffer any such indecision – I know I’m not French.

Marching proudly back to 1920’s Germany, Quebec’s decision to act like an Imperialist power, where immigration from third world countries is welcome, as long as everyone leaves their entire life and family behind; as long as these people strictly stay as lower-paid, serf-like servants, rather than equal partners in the economy, as they are in the rest of the country (OK, apart from West Vancouver where, apparently, maids are treated like Django, prior to freedom.). No more overt religious symbols to be advertised, but the amount of Crucifixes in the province remain?

This is not to reinforce the Church’s grasp on everyone’s life, once again. Nor is it to ensure that the French Culture is alive and well in some corner of the World. It isn’t even a move made because the French-language Gendarmerie are losing grip on the restaurant sign pusch. It is simply to gain votes in a possible election this year. Grasping at straws would be an odds-on bet, compared to this. Are they really saying that there is nothing of interest they can run on, except embedding a fear that the Muslims are taking over, and the entire French high living, entitled, Welfare State-run, luxury life is about to end in the Mother country, because it simply cannot be maintained in the current and future global economic society, so Quebec has to spearhead it?

This is long-term Fascism, enacted to maintain a short-term goal. What are they going to do before the next election – Bring back dunking stools to root out witchcraft? Is it any wonder that, to everyone outside ‘La Belle Provence’, the next step is certain people will be ‘dance as if they were the wrong colour’, or ‘dress too gay’, and the politicians will start wearing arm-bands? Quebec has always appeared to me to be like a nagging wife: Needy, and desperate to be heard. Change isn’t what she wants…it would leave her with nothing to say. What she wants is the reason to keep on talking about how she isn’t being heard. But, this Charter of Values is not French Culture – it is 180 degrees away from it.

Oh, and Pauline? You don’t need to worry about your populace throwing bombs at each other and destroying the infrastructure, as they apparently are in the UK, because they are unsure of their identity. Your students, corrupt civic politicians and criminal-run construction industry are doing that all by themselves. Perhaps these are the very people that would support your ‘Charter.’?

Steve James is an Actor, Stand up, and Comedy writer in Vancouver BC. He is starting to look for Government employees wearing Hijabs to help him. You can help with his quest by LIKING him on Facebook, and say "Hi, Steve, a quick hello from a Sage News reader."