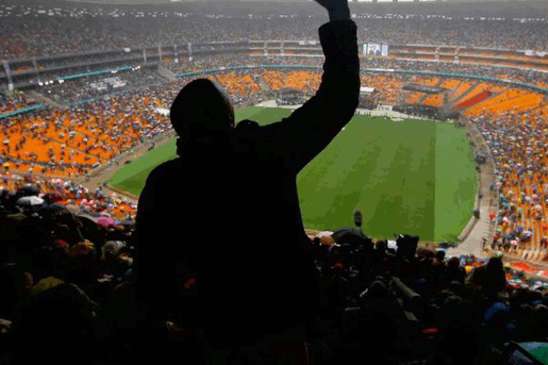 What really happened at the Mandela Memorial.

(SNN) - Are we really expected to believe that one of the largest meetings of global political leaders (and Bono) in history get together this week, and discussed, ...nothing at all?

Haven’t we (and Bono) been asking for this for years, that everyone puts aside their own problems, and meet, casually, and just chat about stuff that they can agree on as a precursor to a global change on Poverty, War, Climate Change, and the massive problems of our day? So, here was the perfect opportunity, but what we learned was something altogether different.

The President of the United States must have the most enviable collection of selfie’s in the World. He, the First Lady, or their daughters, are always doing it: No matter the occasion, or the background, or who is in the picture with them. The First Lady has also found out about her husband and the Danish Prime Minister: More news to come. She is a very fit blonde, though. Actually, she’s married to the eldest son of an ex-Political leader from the UK, so it all looks at bit ‘Bilderburg’, doesn’t it? The British Prime Minister also crashes selfie’s, it seems. We have all been there – the chance to have a picture with a very cool lady that we can lie about later in life and some nerd photo-bombs it – nice going, Dave!

If something was decided, it was the Obama’s post White House hide-away. If you read POTUS’s lips close enough, he actually said to the President of Cuba: “Are we still OK for that beach-house in two years?”, and got a definite answer yes.

The Canadians were so well loved by the South Africans they were offered at least 8 seats for former Prime Ministers and their staff. Unfortunately, they were in the nose-bleeds. These seats haven’t been used in so long there were still Vuvuzela’s left over from the World Cup under each one.

Desmond Tutu must have a picture in the attic – he never ages.

Where was Putin? Did anyone see him? Wasn’t this a perfect opportunity to upstage Americans, again? Perhaps he was a pallbearer, or singing in that very cool band.

In my lifetime, there has been a never-ending merry-go-round of proxy World War III in various undernourished corners of the World. In each case, either side has taken some ‘freedom fighters’ under their wing, only to have them turn around, bite the hands that armed them, and become despotic Governments, or worse. Wasn’t this the time to have Putin and Obama make a difference; meet everyone together in a room in a kind of interview and find out who was going to be next to lay down their arms in return for climate friendly assistance from the First World to stop their people from starving? Or at least hold out some hope for us by having a selfie with them.

In the end, nothing happened, and nothing was decided. No late night talks, no casual conversations, no interaction with anyone of importance (and Bono.). I guess, they were all too busy spying on each other to talk to each other. Pity, really.

Steve James is an Actor, Stand up, and Comedy writer in Vancouver BC. He doesn’t have a selfie with the President, but would like one with the Danish Prime Minister.