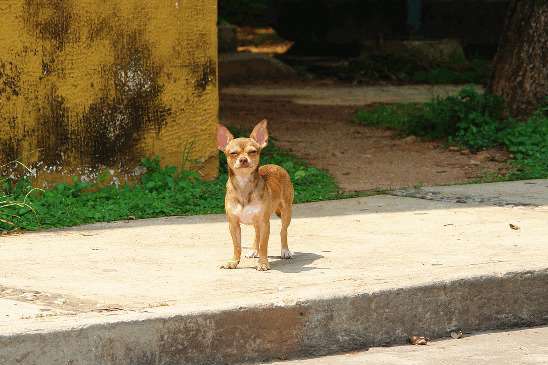 "RESERVOIR DOGS" Have U.S. Citizens Fearing for their Lives.

(SNN) - Unlike the movie, these dogs have nothing to do with diamond heists, and Quentin Tarantino is not responsible for bringing this lawless band of gangsters together, as far as I know.

Citizens of Phoenix, Maryvale and other towns in the state of Arizona are reported to be in a state of terror over packs of what are being called vicious feral dogs. No, not salivating, bloodthirsty wolf-size hounds, rather, deadly Chihuahuas roaming the streets, flexing their muscles, and honing their yappy barks causing parents to lock their children inside, barricade their homes, and carry arms to protect their families from the gangs of savage puppies.

Fear and Loathing in Arizona

Like a Stephen King novel gone wrong, animal control workers are fielding thousands of calls from intimidated and fear-ridden Arizona citizens. As pounds are full to capacity their only recourse has been to suggest proactive measures against the gangs of ruthless ruffians, such as:

The ferocious invasion of malevolent cur is no laughing matter, says Animal Care and Control workers who are warning the general public to make citizen's, or in this case, canine arrests when possible, but NOT to be heroes due to the inherent danger of handling the menacing miniatures. Arizona officials have declared a state of emergency and are prepared to call in the military if the rogue chihuahuas continue their reign of terror.

Photo: Some rights reserved by almass1981 flickr photostream, The Sage nor this article endorsed. The original image can be found here.