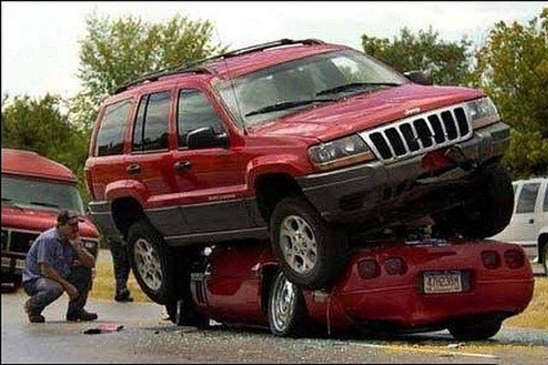 My Vacation with Widowmaker

(SNN) - Had a little car boo-boo while vacationing in Maine this Summer. I’m fine, thank you. Wandering moose and shore-bound Lobstermen are fine, too.  In fact, everyone’s just peachy.

But on the list of things that can spoil a vacation, a car wreck is right up there with terrorist kidnappings and Irish B&B breakfast fare.

Let’s start at the beginning, shall we? Years ago, I was born in a little village called Brooklyn, N.Y., the son of poor but honest immigrants who…

Okay. Let’s pick it up a month ago at Boston Logan Airport’s rent-a-car counter.  My wife and I had just snagged the worst rent-a-car in the contiguous 48, perhaps even the non-contiguous 48. (“Contiguous” is the word I’ve chosen to use three times today and thus make mine forever.)

How bad a car was our rent-a-car?

It was so slow; sloths sauntered across the highway flipping us off.

It made a wobble-wheeled roller skate look like a Lamborghini.

The advertised “five passenger” sedan meant two passengers in the front and three running alongside.

The trunk could only hold two dead goons or five stoolies and a Cannoli.

The transmission was four on the floor and one in the ashtray.

But the worst thing about “Widowmaker” was its South Carolina license plates.  Massachusetts drivers view southern plates with the same relish a Great White Shark covets Chum. Ironically, nine out of ten Great Whites prefer their Chum without relish.

True story:  A 14-foot Great White Shark was spotted ten feet off a Boston area beach the very week we were in New England. When asked why it didn’t come ashore, the shark replied, “Why risk getting hit by a Boston driver?”  (Great Whites have a surprisingly dry sense of humor.)

Widowmaker managed to make it from Boston to our vacation rental in Kennebunkport, Maine.  Here’s the way our annual vacations work: My wife rents a place that comfortably sleeps five and then invites 60 of her closest friends and relatives to stay with us.

The gathered funseekers spend the time reminiscing about departed relatives, eating fattening food and playing Strip Yahtzee.  There was a new development this year. Almost everyone now has a social media device and arthritic thumbs flew about as they texted one other from the next chair.

One night we drove Widowmaker out to dinner with two of my wife’s friends. On the way back, one of them decided to adjust the overhead light in the passenger compartment. Good plan. It only took until dawn to kill Widowmaker’s battery.

Next day, when I rolled out of bed at the crack of noon, I was already late for lunch with one of my friends. Widowmaker, meanwhile, was as lifeless as a Lobster Tofu party. We called the rent-a-car company for an immediate jump. They said take a Prozac, they’re on it and will have a repair truck to us in two-three days, tops.

In stepped a relative of my wife. The woman is an 85-year old, feisty and generous Virginian, there with her a 67-year-old lawyer partner, also a female woman. After the Maine visit, the duo would drive to Provincetown, MA, to be wed.

I strongly support this because I believe in equality for all, no matter their age, gender or sexual preference. And because I hope to convince lawyer-wife to sue the rent-a-car company for me pro bono.

But first, off I go in the car borrowed from my wife’s relative. I can’t adjust anything in it because the controls are confusing, there was no time to learn them, and I am a congenital idiot.

I make the drive hunched over like The Elephant Man and listening to blaring static in glorious Dolby sound.  Of course I get lost, and then compound matters by violating the Law of Mankind designed for my kind of man—I stop and ask for directions.

“Just cut through that alleyway next to the Dumpster,” my friendly advisor suggests before handing me a card for an orthopedic surgeon.

“War wound or born that way?” he asks.

Off I drive, taking the shortcut. I find the restaurant on time, despite a detour to sideswipe the aforementioned Dumpster.

This ruined my day, ruined the lunch, and ruined the symmetrical lines of the 85-year-old relative’s car.

When I returned, Widowmaker was fully charged and sneering its little grill off at me.

*If you can avoid it, don’t be old and stupid like me."

*Keep a little vacation money in reserve to cover side-swiping."

(No names of relatives or friends were used to protect the innocent  and because I made some of this crap up. Contiguous.)

Unaltered Photo: Some Rights Reserved by stupid.fotos  flickr photostream, The Sage nor this article endorsed. The original image can be found here