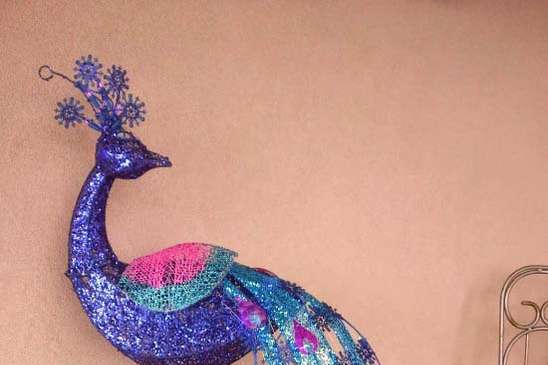 Bad Girl: Have a Confusing Christmas!

Image: The Peacock. You thought I was kidding.

(SNN) - The following story is true.  And it may explain the slightly manic sense of humour I have been displaying on these pages over the past two years.

Most of my life, I have been confused about Christmas.

This is because I am the quintessential Canadian mutt.  Four parts Italian, one part Irish, one part English, one part Chippewa, and the final bit was a surprise.  It overlaps with the English part (wait for it.)

The Italian part is easy to explain.  Every year, my Sicilian grandmother put the plastic lighted crucifixes (made in Japan) in glaring rainbow colours, on the Christmas tree.  I was a bit confused by that, not only because it was gawd-awful tacky and fought with my budding interior designer.  But the part in the 10 Commandments about ‘no graven images’ seemed to be at risk here.

Nevertheless, we all looked forward to the blazing orange, green and red crucifixes, unaware that it was a sort of macabre thing to do to a Christmas tree.  Did I mention Halloween is my favorite holiday?

The Chippewa part was a tad more elusive.  I first got a hint that there might have been First Nations blood in our family when someone asked why we put ground venison in our traditional Christmas Eve spaghetti sauce.  True, we had a freezer full of deer, moose, salmon, and not much else.  Later, it occurred to me that I actually hadn’t tasted beef until I was ten, when for my birthday, Dad took us to the A&W for a real treat.  “This tastes weird,” I said, wrinkling my nose.  “It’s made from cow,” Dad said.

Of course, if I had been more on the ball, there were other clues.  But at the age of six, you don’t necessarily see things as out of the norm.  That summer in Toronto, I loved day camp.  They split us kids into groups named for First Nations tribes.  By happy coincidence, I got placed in the Chippewa tribe.  When I got home and announced this, the reaction was: “Thank God it wasn’t Mohawk.”

The camp leaders were really impressed with my almost-authentic costume.  (Everyone else was wearing painted pillow cases.)

But the real confusion about Christmas and my provenance came many years later.

I spent most of my life not knowing we were part Jewish.  I was about forty, when the designer shoe (a bargain on sale at David’s) finally dropped.  Dad and I were eating pastrami on rye at Shopsy’s Deli one day (which we did on a regular basis, once a month – a reasonably intelligent person might have considered this the first clue) when Dad wiped a drip of mustard off his face and said:

Dad: “I haven’t heard from my cousin Moishe Goldman in a long while.”

Me:  “We have a cousin named MOISHE GOLDMAN??”

Of course, if I had been thinking, all this made sense.  We had lived in a Jewish neighbourhood.  Our last name is Hebrew for antelope.  And I was only the only kid in school who got Halvah in their Christmas stocking every year.  (Damn straight.  I really did.  I still do.)

So I’m hoping this may explain why we have a five foot lighted Christmas peacock on our front porch this year, and a lighted Christmas palm tree in our back yard.  “A Peacock in a Palm Tree” may be confusing to you folk who know the song and are expecting a partridge with pears, but to those of us who have been confused about Christmas all our lives, it is mere icing on the proverbial Kugal.

Melodie Campbell writes funny books. You can buy them at Chapters/Indigo, Barnes&Noble, Amazon, etc.  Sometimes even at the discount table at Zehrs and Walmart.)