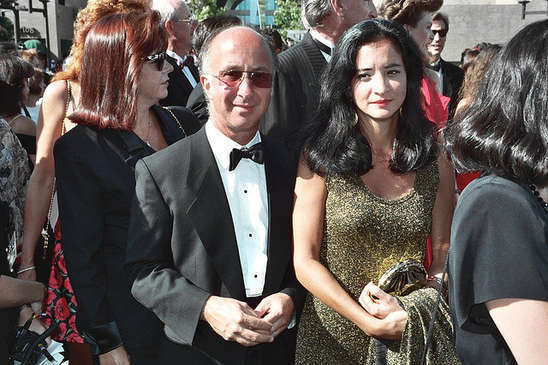 Photo: Paul Shaffer at the Emmys

(SNN) Lost in the wave of  sentiment and sense of loss caused by David Letterman’s final goodbye is another great subtraction from the cultural scene—The CBS Orchestra, formerly the World’s Most Dangerous Band (WMDB).

In case you missed it, Shaffer said he would disband this great band as of the end of the Late Show. I think many figured, as I did,  he might take them on at least one lucrative national tour before shutting down their sound.

Not blaming Shaffer, he’s worked as hard—or harder—than Dave over the past 33 years (he didn’t do the morning show).  While Letterman has been notoriously self-deprecating about his own talents, he has been unfailingly and non-ironically effusive in his praise of Shaffer and the band.  I cannot think of a single instance where Dave has said a discouraging word on air about them. No surprise there, among the things Letterman has most admired over the years, is genuine talent and intelligence. Shaffer and the Boys (and Girl) brought plenty of both.

Of course viewers missed hearing the best of the band—the long interludes played during commercial breaks.  So I have an idea: Why not an album or two of the best of those? Be nice to hear the long version of the Late Night theme, too.

It wasn’t by accident that the Rock N’ Roll Hall of fame used Shaffer and his players at their annual induction ceremonies. Not only were Paul and the gang among the most talented musicians in America, they are among the most versatile.  They frequently played behind Letterman’s musical guests; blowing the lid off charts they might have first seen and rehearsed that afternoon.

And like a great sports team, they had the advantage of being teammates for a long time and knowing each other’s strengths and preferences.
Bassist (and vocalist) Will Lee is the only musician other than Paul who’s been with the Late Night and Late Show players from day one. But one band member on Dave’s last show goes back even further than Lee, playing in an earlier iteration of Shaffer’s musical merrymakers. Tell you who in a second.

Drummer Anton Fig joined the WMDB in 1986, replacing Steve Jordan. Guitarist Sid McGinnis replaced Hiram Bullock in 1984 on the old show. Fig, McGinnis, Lee and Shaffer have been the core four ever since.

True Dave fans recall the band expanded when Letterman went to CBS in 1993. NBC claimed copyright on the “World’s Most Dangerous Band” name and it took a while for Paul to settle on “CBS Orchestra” for the new group.

After a three-month false start with a second keyboardist (Bernie Worrell) at CBS, Paul replaced him with a horn section instead. Perhaps the best-known regular on horn was saxophonist Bruce Kapler, who made a grand entrance each December for the sax solo on Darlene Love’s singing of “Christmas (Baby Please Come Home)”. The better-known sax man, David Sanborn, appeared frequently as a guest.

Another significant add to the new band was, of course, Felicia Collins (1993) who not only provided some excellent ax work, but brought some soulful vocals to the party.

The three horns who closed the show were Aaron Heick, who replaced Kapler on sax in 2012, Frank Greene on trumpet, and Tim (Bones) Malone, his Slushpump and his gaudy jacket collection.

Bones is also the answer to our trivia question. He played with Shaffer before Letterman in the NBC’s Saturday Night (later SNL) house band. You can find tons of additional information in Wikipedia and band member’s web sites.

Worry not for the individuals. All are veteran session players to whom many gigs will come in the future. But it is a sad farewell for all of us who remember their many years with Shaffer, and the great music they brought into our homes.

Unaltered Photo: Some Rights Reserved by Alan Light Flickr photostream, The Sage nor this article endorsed. The original image can also be found here.