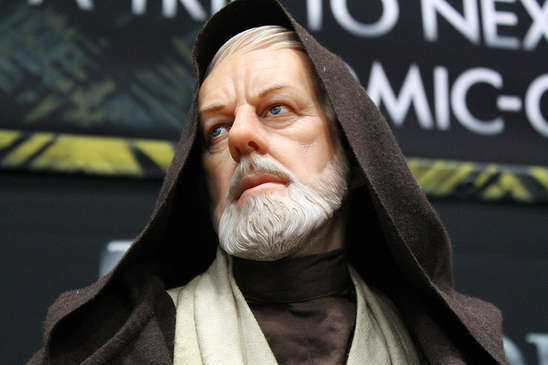 Can Obi-Wan Colbert Save Us from Trump?

(SNN) It is a truism of nature that when you remove a natural predator, its prey flourishes. I would like to use this theory to explain something otherwise inexplicable—the Rise and Refusal to Fall of Donald Trump.

There is no shortage of theories regarding Trump.  He is the most entertaining Presidential candidate in ages—in a trainwrecky, surrealistic, oh-what-the-hell-we’re-all-gonna-die-anyway kinda way.

But why Trump? Why now?

What started out like a bad guest at a dinner party is now the guest who not only won’t go home, but has pocketed the silverware and bedded the host’s wife. Why? Because there is nobody to stop him.

Which brings us to Cork’s Natural Predator law.

Trump’s biggest enemy in nature isn’t another blowhard, or someone who thinks he can out-shout or out-think him. You can’t argue logic with an illogical person. If you attack him on an issue, he attacks you for attacking him and the issue gets lost. The trick to trumping Trump is a brilliant, relentless and fearless comedic mind with a forum to express it.

And as of this moment, that is the missing predator.  Never has modern day Media seen such a shortfall of bright, perceptive comedy.

It Started with Doonesbury

You can start back more than 18-months ago when Garry Trudeau went on what looks like a permanent vacation from writing his daily Doonesbury political comic strip. His brilliant mind has been seduced by television and his cartoon output reduced to a Sunday panel.

David Letterman put the fear of God into presidential hopefuls—he once famously got John McCain to come on and apologize for cancelling an earlier appearance. Dave’s gone. His only notable public appearance was onstage with Steve Martin and Martin Short for a Trump Top Ten list.

The next big blow came with the retirement of Jon Stewart from The Daily Show. This was an enormous loss in and of itself but also meant the end of the acidic commentaries of Lewis Black.

Stewart’s replacement comes with some ill-advised Twitter baggage and has already promised not to take on Fox “News” Channel the way Stewart had. It appears Trevor Noah has arrived white flag in hand. We shall see.

The character Steven Colbert played on The Colbert Report for ten years has gone away to be replaced by nice guy Larry Wilmore, who has had little impact and whose ratings have sagged.

Jimmy Fallon is a political Eunuch who loves any politician who will come on his show. And in fact, the Trumpster will be on Jimmy’s Fun-go-round Friday (9/11). We can expect a few lobbed softballs and a game of Beer Pong, or maybe something where they exchange wigs. Fallon will not lay a glove on him, not when it could endanger his ratings or his relationships.

The other Jimmy, Kimmel, and Seth Meyers haven’t been making politicians squirm lately, and the jolly Englishman who replaced Craig Ferguson is similarly bland.  Conan? Still waiting for the call to replace Leno. (Ssssssh, don’t tell him)

Political pundits, cognoscenti, critics of all stripe and gravitas will watch to see if Steven Colbert will prove to be a political force.  We can only hope he’ll be a man who will tell people when Emperor Trump is going commando. Because…otherwise, who will? (Colbert got in some shots on his debut show.)

So, Mr. Colbert. Not to put any extra pressure on you, but let me paraphrase Princess Leia at the beginning of the first Star Wars:

“Help us, Obi-Wan Colbert. You're our only hope.”

Unaltered Photo: Some Rights Reserved by Jim and Rachel McArthur Flickr photostream, The Sage nor this article endorsed. The original image can also be found here.