(SNN) I got a tattoo recently to honor the life and death of my daughter. The potential of her. The possibility of her. The scarred grief of her that tore up my heart. 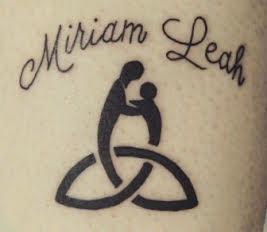 The fact that she was not born alive did not alter my love for her, nor her realness to me. I felt her life inside me. I had hopes and dreams for her. I have memories of her: the moment when the weight of her father’s body first became too much to bear and he complained because it had never bothered me before; morning nausea that sent me running from my dining customers to the latrine in the coffee house where I worked; the moment her heart first started beating and it woke me from my sleep—and I knew, I somehow knew, I had life inside me and I cried with awe and joy; the feeling of her body barely twitching in my womb; the god awful cramping waves of labor and anguish as my water broke and I knew I was losing her; and more. …

I had named him Moses Lee if he was a boy, and her Miriam Leah if she was a girl.

When these scars stay inside the heart they continue to damage us. And the only real way to heal is to get them outside of our selves, to share the burden, and thereby to lighten it. Some do this within a therapeutic environment, some by being lucky enough to find kindred souls who have been through similar, if not the same, circumstances and sharing with each other. Some by having friends and family, or caring community members, who care enough to listen with compassion, even if they haven’t been through the same things, even if they find it hard to relate, even if they find it hard to listen to.

I got my tattoo to symbolize moving my scars from the inside to the outside, where they do less damage. Who’s next?