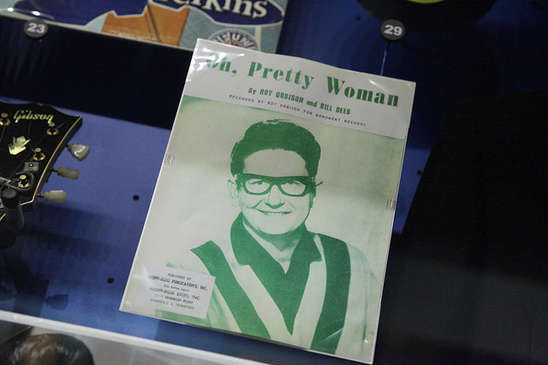 My Near Miss with Rock n Roll History

(SNN) He owned one of the most singular and distinctive voices in the history of popular music. It led him through fame, countless personal tragedies and a place in the Rock and Roll Hall of Fame.

I had one chance to interview Roy Orbison. You might say I choked.

If you’ve never heard Roy Orbison’s voice before, please do. His prime was the sixties when a string of soaring operatic pop tunes he wrote and recorded owned the airwaves. He was an all time great, inducted into the Hall of Fame in 1987 by Bruce Springsteen, who said:

“In 1975, when I went into the studio to make Born to Run, I wanted to make a record with words like Bob Dylan that sounded like Phil Spector. But most of all, I wanted to sing like Roy Orbison.”

Movie fans may know Orbison best for “Pretty Woman,” the Julia Roberts movie that borrowed its title and title tune from the Orbison hit. (The song is still used in commercials today.)

Mostly Roy is remembered for those operatic-style ballads. Story songs of teenage angst, they were brilliantly structured little playlets that began quietly and built musically and emotionally. Soaring above was that amazing voice, higher and higher until it crescendoed to a held note that would scare most singers silly (Listen to “Crying” or his live version of “Leah” in the “Black and White Night” concert. (https://www.youtube.com/watch?v=_mG_sSxVdfU&nohtml5=False)

Orbison’s ability to sing and write about tragedy was well earned. His wife was killed in a motorcycle accident and two of his children burned to death in a house fire. He was an original man in black, with dark glasses that stayed in place throughout his concerts.

The British invasion of the sixties couldn’t slow Roy but he later faded until the mid 80s. Then Orbison joined with Bob Dylan, George Harrison, Tom Petty and Jeff Lynne to form “The Travelling Wilburys,” an all-star rock band that spun off a few classics of their own.

Orbison had a solo tour in early December 1988, set to make a stop in Boston. I was then an entertainment reporter at a local TV station, and quickly arranged interview Orbison.

But then, as I mentioned, I “choked.” The cause of my choking was an ailment called Esophageal Dysphasia. According to the Mayo Clinic website, Esophageal Dysphasia “refers to the sensation of food sticking or getting hung up in the base of your throat or in your chest after you've started to swallow.”

While it can scare the Hell out of the sufferer and those around him, my Esophageal Dysphasia was not technically choking. The food always got hung up below where inhaled air bids farewell to food and drink and headed to my lungs. I could still breathe during acute events, but could not swallow or do much of anything else.

It got worse that fall.  I could always tell when the food got caught. Not much one can do then but relax and wait for it to come loose and pass through. If it did not, you take a Nitroglycerin pill. They’re not just for the ticker; Nitro relaxes muscles, including the ones in the throat.

Thanksgiving Day, 1988, featured a traditional dinner with all the traditional fixin’s. It did not did not end well for me. Let’s call it Tom Turkey’s revenge. Mid meal I felt that old familiar feeling.  I excused myself and walked around, even jumping in place a few times. No joy. I finally opted to be taken to the emergency room when several nitros failed to do the trick.

A side effect of food that gets stuck for more than a minute or two is it really angers up the Esophagus. The throat takes it personally, and pretty soon it is peristalsising like crazy, trying to get the stuck item to move along. It feels like an internal dragon is running its claws along your throat.

By the time I was checked into the ER and trying to relax, I was in full Peristalsis misery but before the doctor got to me, the Nitros kicked in and I was out of there. None the worse for wear, I got home in time for dessert.

The following week I was covering some Christmas-themed event and looking forward to Saturday and the Orbison interview and concert.

Suddenly an hors D’Ouvres table leaped up in front of me. Before I could think, I’d popped a piece of chicken into my yap and bingo---here we go again.  I explained my plight to my camera crew, told them to shoot B-roll while I popped a couple of Nitros and waited for things to clear up.

It was a Thanksgiving rerun.  Off to the emergency room I went.

I popped another Nitro as I waited in the ER, but the peristalsis had become extremely painful.

“Hey aren’t you that guy on TV?” a relative of a knifing victim asked. I grunted a “yes,” and pointed at my throat.

“What movies do you like this Christmas season?” Mr. Bloodyhand from a tragic decanting accident wondered.

“Gonna snow for Christmas?” some guy who thought I was the weatherman asked.

What were the odds of all three of my fans showing up at the same time in the same emergency room?  I tried to smile at them and not cry at the dragon tearing at my throat.

I was saved by an ER doc carrying long-handled medical barbeque tongs and with an anesthesiologist in tow who led me into an ER meatball surgery suite. The Gas Passer did his thing, but didn’t account for the adrenaline, I guess, because soon I could feel the tongs going down my throat and plucking out what had been fine hors douvres not that long ago.

When it was over, he scheduled me for a procedure that Saturday. That meant I would have to reluctantly cancel the interview with Orbison.

Orbison sang for the lonely that weekend, but I wasn’t there to hear it. Reviews indicated he was spectacular. Word was he would be back in Boston soon. I would make sure I didn’t miss him the next time.

Orbison flew off for a concert near Cleveland the next day and then he home to Nashville.

Photo credit: Some Rights Reserved by Sam Howzit Flickr photostream. The Sage nor this article endorsed. The original image can also be found here.