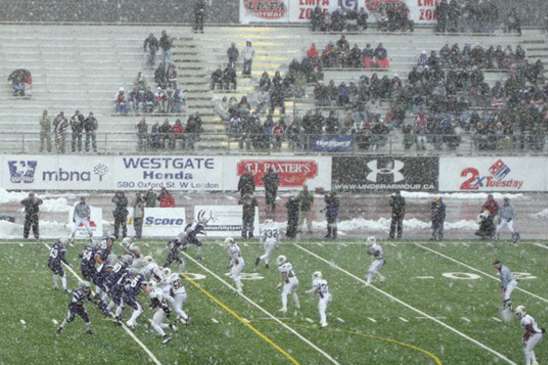 The CFL expands into the Northwest Territories

(SNN) - The CFL has announced today that they have added another team to the roster. With the addition of the Ottawa Red Blacks to the CFL Mayor Mark Heyck of Yellowknife quickly jumped on the idea of developing another city for the CFL schedule. The proposal was put through counsel and had quick approval. Mayor Heyck quickly contacted CFL official Trevor Hardy who was very excited about adding another new team to the 2014 schedule.

The next step was to have the plans and site of the Yellowknife Stadium put forward to counsel. Local developer Dance Hephner from ADHD Developments put forward a proposal and had recently purchased some land from a local mining company. (Concept of stadium, see photo right)

A name was now needed to finish the proposal and after a brief discussion amongst counsel members, councilman Bob Brooks came up with the name "Yellowknife Eskimos". Mayor Heyck quickly contacted Trevor Hardy with the name to finalize the deal. Trevor unfortunately relayed the message that the CFL was trying to avoid having teams from different cities use identical names like Saskatchewan and Ottawa Rough Riders. He also stated that the addition of numbers or any other numerical content to the name was not allowed either. Yellowknife Eskimos II was out. Mayor Heyck called another meeting but it was delayed for a couple of hours while they waited for councilman Bob Brooks to return from dental surgery. When he arrived, Mr. Brooks was informed of the decision by the CFL to not allow the name Yellowknife Eskimos. Bob obviously had another name in mind and with his mouth still frozen from surgery his only comment was "Nuck". So the new name of the latest CFL Footbal Team is the Yellowknife Nucks. Go Nuckers Go!