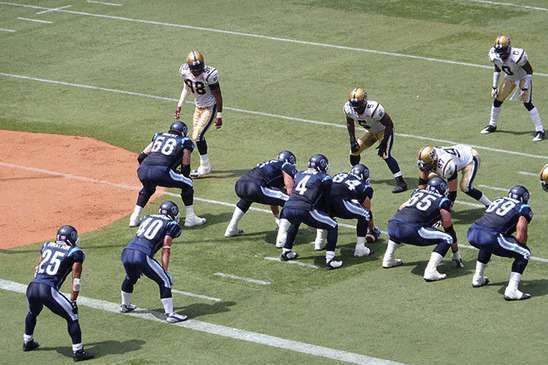 Ricky Ray Banned from the CFL

(SNN) - Ricky Ray, of the Toronto Argonauts, was fined today and then permanently released from the CFL. "He will never throw another football for any team in the CFL ever again," said the very upset CFL commissioner, Mark Cohon. Ricky Ray had no comment when reached today but his lawyer Andrew Luft is preparing a defence for the suspension and a $800,000 fine.

The fine and release are from an investigation carried out by the CFL Doping and Prosthetic committee that has been looking into allegations of the medical altering of athletes by the Redding Medical Centre in Redding California. Former general manager Eric Tillman of the Edmonton Eskimos brought the allegations forward to the CFLDP when he was fired from his general manager position earlier this year. Tillman said that the Edmonton Eskimos have been working with the Redding Medical Center for years now trying to perfect the CFL quarterbacks. It is alleged that Ricky Ray had gone under surgical manipulation of his right index finger to extend the length of his finger allowing him to grip the larger CFL football better. He also is said to have had muscles from his right buttocks transplanted into his right arm giving him almost super human strength and accuracy when throwing.

Two former receivers of Ricky Ray agreed that his accuracy and strength when throwing the football seemed "super human". Ricky Ray's wife said, "I know that he went in there for a medical treatment a couple of years ago."

Mrs. Ray was reluctant to say what the procedure was but said, "It was a great success and aided our marriage a great deal."

Photo: Some rights reserved by ethanf_15 flickr photostream, The Sage nor this article endorsed.