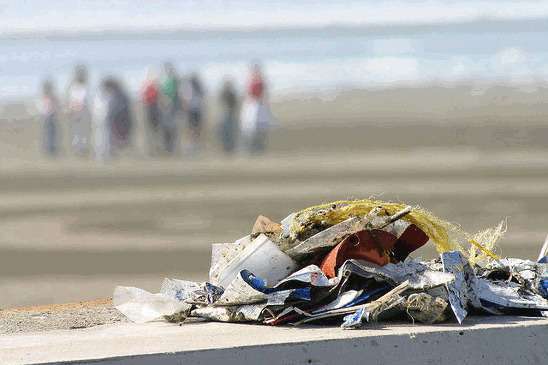 Ocean garbage: Union says they can't deal with it

(SNN) - A whirling maelstrom of plastic and other garbage is several miles across in the Pacific Ocean. This is according to leading oceanographic scientists.  The scientists are so worried they’ve approached the international union of garbage collectors for help.  Dr. Pisces, a leading researcher on ocean health, is panicking.  “We have nowhere else to turn,” he says. “Heads of state just ignore our warnings.  As long as little Timmy simply plays with the bottle cap he found in the fish he ate today, nothing will happen.”

Unfortunately, the garbage collectors say they simply cannot deal with that much garbage under ocean conditions. Their trucks aren’t outfitted for use on water, and Monday – Sunday pickup scheduling is continually hampered by bad weather. Mr. Waxo, head of the union, is disappointed.  He commented, “The vastness of this situation offers the possibility of many more jobs at good wages for union members.”

Dr. Pisces refused to be deterred, saying several scientists have just begun research on how to outfit garbage trucks for water use, much like the Seattle Ride the Duck transports. Mr. Waxo says, “The union fully supports any activity which results in good paying jobs for union members, provided we can deal with the scheduling issues.”

Outfitting garbage trucks for ocean use is expected to take 2-3 years. In the meantime, Dr. Pisces warns, “Expect more incidents like Little Timmy’s mother getting a Victoria’s Secret pink plastic bag stuck in her teeth after eating a can of sardines.”

Photo: Some Kia Schrieber Rights Reserved by  flickr photostream, The Sage nor this article endorsed. The original image can be found here.