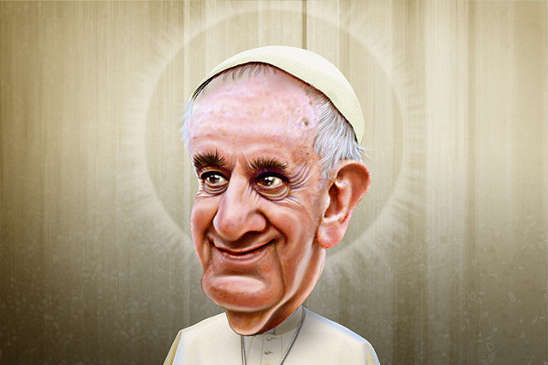 (SNN) - ROME - A well-placed source in the Vatican has confirmed that the College of Cardinals has been ordered “to the mattresses.”* Sources say this is a precautionary measure to protect Pope Francis.  Rumors continue that the Italian Mafia, which does not exist, may retaliate for his decision to excommunicate all Mafia members, real or imaginary, from the church.

The Vatican’s newly appointed Vice Pope for Self Defense, Santino Cardinal Corleone, tweeted last week that many Catholic officials are concerned the Mob may cause the Pontiff harm.

One alleged Mobster disputed that assessment, saying most alleged non-existent Mobsters understand the Pope’s decision and are willing to forgive and foggedaboudit.

“I say Old Chap,” the alleged source told this alleged reporter, “Frankie’s gotta do what Frankie’s gotta do. He shudda called a Sit-down with the Families first--out of respect. But hey, he’s Infallible even if what he says is a buncha Papal Bull.”

Meanwhile a spokesman for the alleged Catholic Church, His Eminence Vincent Cardinal “Vinnie The Cardinal” Cardinalissimo, said, “Eh, like him or not, the Pope is the Boss. And his Boss is Almighty “God the Almighty” God.

“If the Mafia or anyone allegedly else doesn’t like His Holiness’ ruling, they can either clean up their act or they can just pucker up and kiss my rosy red ring,” Cardinal Cardinalissimo added in his charming Irish brogue..

Another Vatican insider, who requested anonymity because “its been a childhood dream of mine to be an anonymous source,” told me that one alleged Mafia Don, Donny Allegeda, told him “the best thing the Pontiff has going for him is that most Goodfellas think the Pope is named after Frank Sinatra.”

Francis Albert Sinatra holds a special place in all Italian hearts, including the alleged Mafia, which still does not exist. According to Wikipedia, roughly 83% of Made Men were made babies to the sound of Sinatra records.

In other shocking Pope news:  According to an allegedly high church official, who asked not to be identified because of his close physical resemblance to Betty White, His Holiness has a new plan to solve the conflict between the US and Russia concerning the Ukraine.

“Dude, I been watching the World Cup. Guess who else is a fan of crushingly dull nin-nil sporting events?” my source asked in a fake Italian accent.

“Nope. The Pope,” the source said. “We were watching a match, putting a big dent in the sacramental  Manischewitz, when he says to me, he says, ‘Babe, see if you can set up a Friendly between the US and Russia.’”

“By ‘Friendly’ you mean, a Soccer match that doesn’t really count, like some teams played warming up for the World Cup?” I asked, expositorily.

“And the winner of the Soccer friendly gets to keep Ukraine?”  I guessed.

“Have you been to the Ukraine? The loser has to keep it! Bada-boom! Bada-bing!”

“Well, you’re no spring chicken yourself, Fatso,” he replied.

My cheeks stinging from his insult and my cheap after-shave, this reporter left wondering just where the U.S. would put the Ukraine if Russia won the match.

*The term “to the mattresses,” popularized in “The Godfather,” means to be prepared for battle. In local parishes, it has another meaning, but we’re not going there.

Photo: Some Rights Reserved by Donkeyhotey flickr photostream, The Sage nor his article endorsed. The original image can be found here.