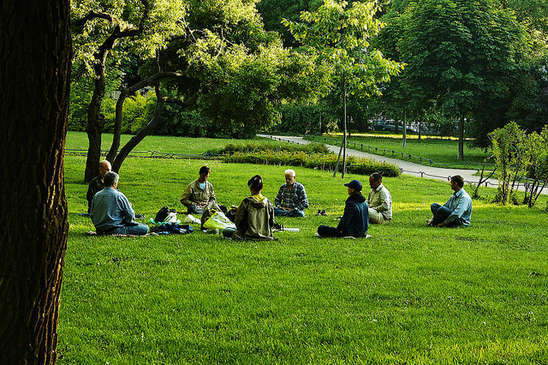 Photo: I think they're all on grass

I can’t prove it, but I know she forged my signature to sign me up for a group tour of a local ‘Self-Realization’ Center. I know this because I don’t take tours, I don’t like groups, and I’ve avoided Self-Realization ever since I realized the less I knew about myself, the better.

But let’s leave that particular neurosis for another day, shall we?

The Center is located in Malibu, about 10 miles from where we live near Los Angeles. That meant the fun began with a ride in a bus designed by the Marquis de Sade and built by the American Backache Association.

When we arrived, everyone debussed and, as tourists are wont to do, started chattering like chipmunks. Soon, a not-so-chipper monk* from the center popped by.  He explained that our chatter might disturb meditators on the grounds getting an early start on the ol’ meditating.  That made sense, of course, but when a motorcycle roared by a second later, it took the edge off his point.

This sort of start to an adventure delights card-carrying, licensed and registered writer/cynics like myself.  Warm and fuzzy is the sworn enemy of cynicism and satire. So give me events that encourage looking askance, provide sarcastic fodder, and assure that already low expectations remain unmet.

Many satirists need a nasty side that readers rarely see and their friends and relatives get to endure.  We use what makes us angry to angrily tear off an angry first draft of our story. We then soften the worst of the mirth and try to turn it to comic gold.  Then it’s polish and rewrite, taking care to stop the process before it gets mushy. When the story is presentable enough to bring home to Mother—assuming Mom wears combat boots —we’re good to go.

Where was I? Oh, right. Mr. Shaddap left, our tour guide arrived, and I self-realized I had another disappointment in store.

I wanted a freak. I got normal. I expected flowing robes, beads, garlands of flowers, pendants, circlets, medallions and jujubes.  Instead I got slacks and a shirt.  (Pretty sure his shirt was from the Sammy Davis Nehru Collection, but it’s not like Yves St. Laurent has been begging me to pose in his catalogues.)

Although this particular Center has an underlying religious affiliation, the tour was missing any heavy duty proselytizing for me to mock. I dislike being preached at and those who do it. Our guide wouldn’t play.  Insiead of preachy he was self-effacing, witty, informed and soft spoken. All those qualities are no help when you’re trying to write snark.  Even worse, I liked the guy. We all did.

Then there was the place itself, which knocked my plan further off the rails. It was a peaceful, serene, quiet, beautiful, nature-filled oasis.

Certainly it’s not everyone’s cup of Darjeeling, but it wasn’t long before I was going with the flow, not fighting it.

I thought of the old cliché, “any port in a storm,” and got an idea that also was part of the appeal.  After weeks of death and terror, domestic and foreign, this genteel escape from reality may not inspire mirth, but it isn’t such a bad thing.

Call it the timing. Maybe places like this are best for the spirit in times of anger and stress. A relief valve when upraised voices mostly say—in the immortal words of Buffalo Springfield—“Hooray for our side.” Maybe quietude is good. Perhaps listening to silence can be restorative to both true believer and cynic alike.

Hey whattaya know, I had a self-realization after all.

* No one showed me any “monk” paperwork, but I needed it for the joke.

Photo credit: Some Rights Reserved by Konstantin Stepanov Flickr photostream. The Sage nor this article endorsed. The original image can also be found here.