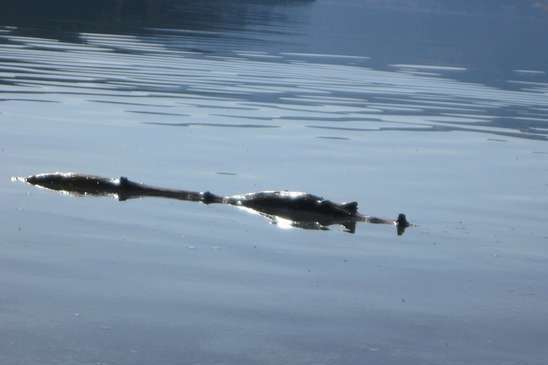 (SNN) - While many had their thoughts on the Easter Bunny this past holiday weekend, one Okanagan resident took a photo of what may, if confirmed, be one of the Okanagan’s famous lake monsters. In the past these pictures have typically been taken of Okanagan Lake. However this photo was snapped at Cosen’s Bay on Kalamalka Lake, near Vernon.

“It wasn’t large,” said Nature “Boy” Floyd, the local photographer who snapped the picture. “It was a small one, just drifting on the surface in the afternoon sun.”

When shown the photo, Jacques Strappe, a local authority on the lake monster, said: “It certainly looks like a photo of L’Ogopogo.”

“I have seen live footage taken by a friend of their mating season, which is around this time,” said Vernon resident Freida Summers.

“Amazing,” said a Vernon woman who frequents Cosen’s Bay, but did not wish to be named. “It only confirms what I have seen there many times but never managed to get on film.”

Floyd's girlfriend, Pinky Tuscadero, believes it is the first time a photograph has been taken of a lake monster in Kalamalka Lake. “I’m calling it ‘Akalaka’,” she said.